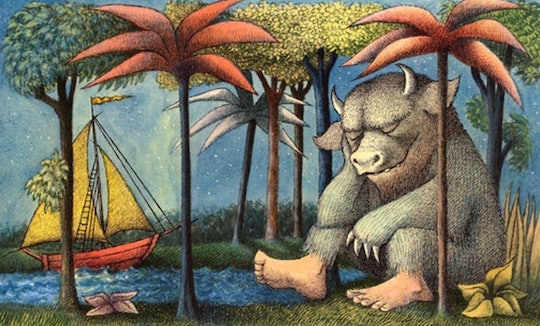 How Wild Do We Let Our Kids Be?

Those of us with the best childhoods have to wonder if someone would call child protection services on our parents today. I spent hours sitting in the crook of a bendy gum tree (there were no sturdy oak trees in Australia) daydreaming and swinging from an old set of bike handlebars I had rigged into a trapeze. It's not clear my parents even knew where I was. I was a weird kid. I was “into candles” for a while. As a first grader, I was constantly having my chair moved because I talked too much in class. Send me out of the room and I’d do little performances out the window that distracted the kids inside. All my report cards are some version of “bright but terribly chatty” or “distracts everyone around her/a constant annoyance, but excellent drawing skills” — essentially “can you NOT.” I was the type of kid that must feel squeezed in a vice in the era of baby DJ classes and hyperactive parenting. How are all the Max-es doing these days, I wonder?

The book that built an anarchic mind space for me is still a favorite among kids and parents. Where The Wild Things Are details minor crimes (OK he chases the dog with a fork) that result in Max being sent to his room. He’s in a wolf suit, which seems like a green light to get up to mischief, but his mom is not happy when he acts up. Left with a plot of time to think about what he did, Max begins to daydream. His ceiling becomes a canopy of vines and the walls become “the world all around.” The illustrations creep across the white space until the world of the Wild Things eats up both pages.

Max sort of peaces out, doubling down on his daydreams and sailing on an ocean of cognitive dissonance to somewhere he is king. There, he hosts a wild rumpus in a very “not sorry” kind of way. For a few pages, there are no words, just illustrations of the kind of immersive play we now pay thousands of dollars to learn as adults in “flow” bootcamps. The fur and feathers of the Wild Things are etched by Sendak so they're equal parts cuddly and fierce. Max essentially builds and then swings around in his own coping mechanism, until it’s time to go home.

There is an essay from the early internet about the importance of being alone — the gist is that we've lost the art of aloneness. I can’t find the piece, though I’ve spent a bit of time exploring old internet corners for it. The funny thing about Where The Wild Things Are, for being universally beloved, is that it’s a very lonely book — the only people in it are Max, or people Max made up. The Wild Things worship Max, but in the end, it isn't enough — he wants real people to care about him. He's a kindergarten runaway who never gets further than the end of the driveway.

I don’t remember my mum reading Maurice Sendak; I just awoke one day with the book already having seeped into me, the same way I always felt generally loved but unable to trace the thought. Now I'm a parent, I notice the thought process of the book. Where The Wild Things Are is funny to read to your kid. My daughter Scout loved it as a baby — she’d choose it from her little kid shelves and watch engrossed as we read.

You wonder what is sinking in. I wonder if my daughter is learning that it’s OK to say "to hell with it" and put on your own little freak show if the world gets too sucky. If she's building a little Scout Island she can escape to in her own mind. Or if she's just thinking, "OK, seems like developmentally, I'm supposed to be chasing the dog and threatening my mom at this age."

A friend was staying with us recently, listening to me fret about portioning out my limited time to two kids. “Eh, they don’t need us,” he said eating a chip. “In fact, they needs less of us. The best thing you can do as a parent is let them go play in the basement with a pile of boxes and some sharp scissors for an hour or two.”

We don’t have a basement, because we live in an apartment and our kids’ rooms are glued-shut doorways and repurposed hallways, but I think about it.

“I went down one time,” he goes on, “and Henry had turned the entire basement into his 'lab.'” He holds out his hands like, "set and match."

Sendak has said pointedly that he didn’t write his books for adults, and I think the reason we all love the book so much is it gives Max a lot of rope. He’s allowed to go to the edge of his comfort zone before deciding “he wanted to be where someone loved him best of all.” And so he journeys back, “in and out of weeks and over a year,” to his bedroom, where it seems he has been forgiven. (Lesson: wait out your crimes and you don't have to pay heh.)

What happens when you don't get to grow up wild? I read a study once that correlated a lack of outdoor time as a kid with a need for reading glasses. I never needed them, presumably because I was out dangling from trees and building cubbies out of bark, ripening my eyes with hefty doses of sunshine, but I wonder the same thing about depression.

All parents worry about the isolation cellphones eventually bring kids — about the isolation they themselves feel. I wonder how it is I avoided the sads, or avoided the kind of sads that linger. My working theory is that, having learned to be alone and be king of my own imaginary land, I got a walloping dose of sunshine and air. Through my childhood and teens and twenties, I spent thousands of hours hiking and jogging through the woods on my lonesome. I've skinned solo out into the Australian backcountry in winter, finding myself up on a windscoured ridgeline and feeling that little quake in your gut that tells you that you're far from safety; too far from other people, perhaps.

I think it's important to toe that line.

For all the Wild Things birthday cakes and costumes, I don't know if we are game to give our kids the space we enjoyed ourselves — actual space, and room to grow and be awkward. When Scout hit the twos and the tantrums came along, I obviously wasn't thrilled. As a parent, my instinct is to tamp down the emotions, rather than tell her to ride them like a giant bird-monster.

But I'm second-guessing that reaction.

Our efforts as parents are usually proactive, we're always building our kids' forts for them, smoothing over disappointments with our cheer routines. But what I loved about my own childhood was the roaring freedom of it. It's no fun when your parents engineer the rumpus for you. So I'm trying to create a space for my kids to go a little bit wild, and just worry about making sure there's some supper for them when they get back.