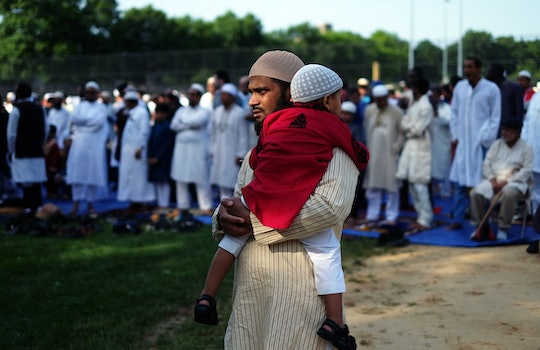 How Will A Trump Presidency Affect Muslim Families? Many People Are Terrified

When business and real estate mogul Donald J. Trump was elected to become the 45th President of the United States, the collective gasp of millions could be heard all across the nation, and even the world. Trump's victory was a total shock to many, stunned at the prospect that a reality TV game show host was actually elected as our next president. For Muslims at home and abroad, a thought of a Trump White House was exceptionally frightening, given his particularly acerbic remarks about Muslims throughout the campaign trail. How will a Trump presidency affect Muslim families?

There's no denying that Trump's win hasn't already begun to affect Muslim families post-election: From uncomfortable conversations around the dinner table to open acts of violence and hate, Muslims are afraid of Trump and what he could do to them as president. Speaking to The Huffington Post, Asaad Alabdulaziz, a Muslim man from Iraq, shared his worries about what could happen to him now that Trump is president: "What about the Muslims who have been working so hard, like myself? Do I have to go back?"

Somaia Saie, a Muslim-American mother of two in Staten Island told The New York Times that she has serious concerns for her Muslim family: "I have no clue how we can raise children like this. As grown-ups, we can take it. With children, it’s another story."

In 2015, Trump said he wanted to ban all Muslims from entering the United States as he began his presidential campaign. Trump has since scaled back his Muslim ban, calling instead in October for "extreme vetting" of Muslims before they could enter the country. Still, there are several potential policies that, if put into place, could wreak havoc on the Muslim community in America.

Perhaps one of the most alarming and disturbing potential policies to come out of the forthcoming Trump administration could be the creation of a Muslim registry. Last week, surrogates for Trump were using America's tragic and shameful history of Japanese-American internment camps as a "precedent" for the creation of such a registry. Forcing American citizens to register based on a single religion sounds an awful lot like that failed German experiment back in 1939 when the Nuremburg Laws established a registry for Jews, among other anti-Semitic restrictions.

Last week, just one week after Trump's win, the Federal Bureau of Investigation released a report stating that hate crimes have gone up as much as 6 percent throughout the country, largely due in part to hate crimes against Muslims in the past year. Between his racist, Islamaphobic remarks and very real statistics to back up Muslims' fears, a Trump presidency could affect the very stability and safety of every Muslim family in America right now.