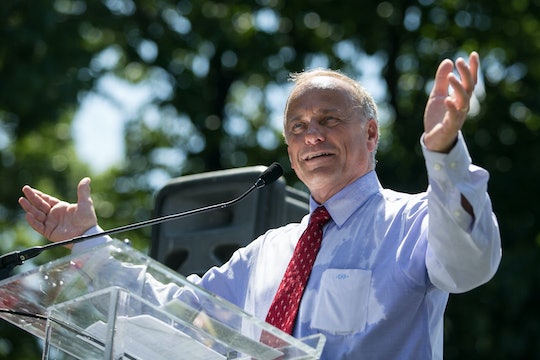 There have been many bills advanced by the GOP under President Donald Trump that have caused controversy, but the ongoing debate about so-called "school choice" under Education Secretary Betsy DeVos has definitely become a hotly contested issue. H.R. 610, aka The Choices In Education Act 2017, was introduced to Congress by Iowa Rep. Steve King on Jan. 23, and mirrors many of the positions favored by DeVos — specifically the establishment of a federal school voucher program, and limiting the authority of the Department of Education. How will H.R. 610 affect funding for public schools if it passes? According to the San Diego Union-Tribune, advocates for voucher programs say it will increase education quality while decreasing taxpayer costs. But critics argue that vouchers will leave less money for public schools, and that low-income students and special education students will suffer the most as a result.

During his campaign, Trump vowed to strengthen America's education system by supporting a federal school voucher program that would provide parents with funding to put towards private school tuition, according to The New York Times, arguing that it would give low-income students better education opportunities. And now, with DeVos as education secretary and King's H.R. 610 bill, it definitely looks as though his plan could become a reality. The Choices In Education Act 2017 hasn't specifically outlined what the voucher plan would look like, but at one point, Trump provided a blueprint. In a since-deleted page from his website, Trump outlined a proposal to divert $20 billion of federal funds towards school vouchers, with the goal of creating a plan to provide a voucher to every student living in poverty in America within his first 100 days in office, according Vox.

According to the U.S. Department of Education, Title I of the Elementary and Secondary Education Act (ESEA) provides federal funding to schools with high populations of low-income students. While Trump never specified where he intended to find $20 billion for his voucher program, he did say it would come from making cuts to the education budget. And since Title I funding already costs about $15 billion, according to The New York Times, it doesn't seem unreasonable to assume that he plans to change that. If he does choose to cut Title I funding though, public school administrators warn that there could be serious consequences.

Although the majority of funding school districts receive comes from the state, the money they do get federally is an important contribution. According to The San Diego Union-Tribune, nearly $100 million of the San Diego Unified School District's $1 billion budget for the 2012-13 school year came from the federal government, "including about $47 million for low-income students, $26 million for special education and more than $4 million for English as a second language." Federal funds also help pay for programs like free and reduced-fee lunch programs, and administrators, like South Bay Union School District Superintendent Katie McNamara, argue that cuts to that funding in the name of supporting school vouchers would have a detrimental effect to students in need. As McNamara told The San Diego Union-Tribune,

The loss of federal funding would be catastrophic to school districts including South Bay Union ... Very basic foundational programs and services would be reduced or eliminated.

Those in favor of a voucher plan as proposed by H.R. 610 argue though that since a voucher requires less funding than the per-student amount of funding public schools receive, it would ultimately be a more cost-effective option. According to The Indianapolis Star, the maximum cost of a voucher would likely still only be about 90 percent of what public schools receive per student, so theoretically, if a student were to leave the public school setting for a private school, the government would save that money. But that would only be the case, of course, if students would only otherwise be attending public schools if they weren't receiving vouchers.

The problem? According to The Indianapolis Star, the majority of students in Indiana who received vouchers during in 2015-16 school year had never actually attended a public school in the state — and Indiana is not the only state to see such a trend. According to The Atlantic, data from an expansive 2015 school voucher program in Nevada found that most voucher program applicants actually came from wealthy neighborhoods, including many who "already had access to the highest-performing public schools." And according to Education Next, Wisconsin Sen. Russ Decker has argued that many of the students receiving vouchers in his state would have gone to private school anyway and paid their own way. Of the Wisconsin voucher program, Decker said, “You’ve got a lot of additional money going into the choice program that we could better use funding public education statewide.”

In the absence of an actual federal budget for vouchers, or even some indication from DeVos about what a federal voucher program could look like, there's no way to know for sure what kind of effect it could have on public education. But since H.R. 610 stands to essentially dismantle much of what does currently exist in federal protections for public education, it probably isn't a huge stretch to assume that public educators have every right to be worried.