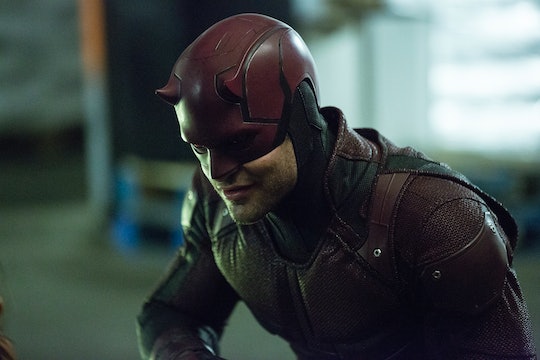 Iron Fist is the last piece to the Defenders puzzle, so it's only natural to assume that the series will find various ways to connect to the other Netflix Marvel shows. While there are sure to be callbacks to all of the other Defenders shows, fans will probably find that a majority of the connections will come from Netflix's first superhero show, Daredevil. So how will Iron Fist and Daredevil crossover? It'll happen in a few different ways.

First, as with all the other Defender shows thus far, nurse Claire Temple (played by Rosario Dawson), who first appeared in Daredevil, will reprise her role in Iron Fist. As was hinted at the end of Luke Cage, Claire will go to Colleen Wing's dojo to be trained. Additionally, Colleen and Iron Fist, also known as Danny Rand, become partners, which is how Claire gets pulled into the main storyline. (What can I say? She's a vigilante magnet!)

Along with Claire, Madame Gao from Daredevil will also appear in the new series. It's clear from the previews that she knows Danny is the Iron Fist and what that all entails. Many comic book fans have also speculated that she's actually the Crane Mother, the powerful ruler of K'un Zi, one of the Seven Capital Cities of Heaven, according to Comicbook.com. The mystic energy of the Iron Fist comes from another one of the Seven Capital Cities of Heaven, K'un-Lun. In the comic books the Crane Mother was an adversary to Iron Fist, but on the show it's possible Madame Gao and Iron Fist could find themselves in an "enemy of my enemy is my friend" situation because of the Hand.

The Hand, which was introduced in the second season of Daredevil, will make a reappearance in Iron Fist. In a clip shown at New York Comic Con, Danny said the Iron Fist is "the sworn enemy of The Hand," Entertainment Weekly reported. When Season 2 of Daredevil concluded, there was a plan by the Hand to transform Elektra into their prophesied weapon, so it's possible fans may see Elektra and Iron Fist face off, if not in Iron Fist then possibly in The Defenders.

It's likely there will be other overlaps between Iron Fist and Daredevil as well, especially since this is the last show before The Defenders airs later this year, so fans will definitely want to tune in for this series.

You can see just how much the two shows overlap when Iron Fist premieres on Netflix on Friday, March 17.