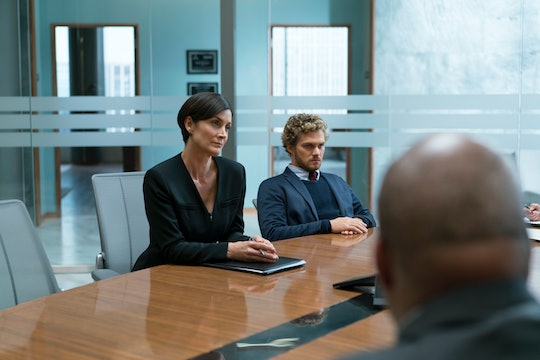 The last Defender is finally here and while he does get his own show, you'll be sure to see some familiar faces in Iron Fist as well. Characters from all three of the other Defender shows can be expected to make an appearance in the new series. So how will Iron Fist and Jessica Jones crossover? Well, a certain lawyer will be there to help Iron Fist — whose real name is Danny Rand — get his father's company's back.

Carrie-Anne Moss will be reprising her role as attorney Jeri Hogarth on Iron Fist and this isn't the first time she's crossed over to another Marvel show. Jeri was last seen during the second season of Daredevil when she was offering a job to Foggy Nelson, who's still kind of on the outs with Daredevil himself, Matt Murdock. Jeri had her ups and downs on Jessica Jones, but overall she appears to be one of the good guys, even though she made some fatal mistakes on the show. Moss' appearance on Iron Fist isn't even listed on her credits on IMDB, so one could assume she won't be sticking around on the series for long. However, she is listed as appearing in three episodes of The Defenders, so fans will be seeing her again soon regardless.

Other than Jeri, there doesn't seem to be many other crossovers from Jessica Jones in Iron Fist, however that doesn't mean it won't happen. Most likely, if there are more crossovers, they're being kept under wraps. The only other character from Jessica Jones fans will recognize is Claire Temple, the night nurse. However, to say Claire's a character from Jessica Jones is a bit of stretch since she's had much larger roles in both Daredevil and Luke Cage. Still, there is a connection there, which acts as a reminder that Claire will most likely be the link that will bring the Defenders together.

Besides these two ladies, any other crossovers will be a nice surprise. Personally, I'd love to see Trish or Jessica herself show up at some point, but both seem unlikely. That being said, there will be cameos from the other Marvel shows in Iron Fist. Misty Knight from Luke Cage is supposedly making an appearance, and Madame Gao from Daredevil will definitely be on the show based on her presence in the promotional photos and previews.

You can see all the guest appearances and crossovers when Iron Fist premieres on Netflix on Friday, March 17.