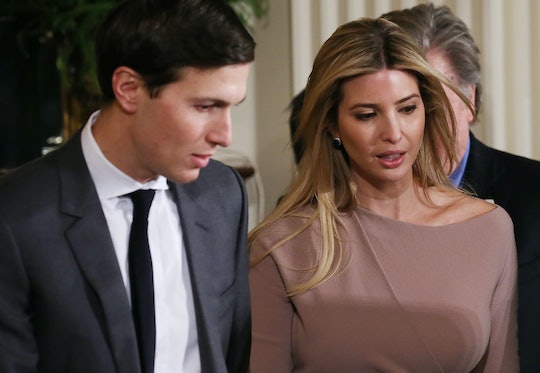 How Ivanka Trump & Jared Kushner Will Earn Their Money

The New York Times and ProPublica have published analysis on the first set of financial disclosure forms from the Trump White House, covering the 180 senior officials closest to the president. And in addition to finally giving the nation a glimpse into the earnings of the wealthiest administration in history, the documents are raising questions about how the Trump presidency may benefit the family’s business empire in ways that stretch our current ethics statutes. For example, Trump’s son-in law and daughter recently took unpaid positions in the White House as senior advisers to the president, but will retain some $740 million in business assets and investments, according to The Times. That makes the question of how Ivanka Trump and Jared Kushner will earn money while working in the White House a far more thorny issue. Taking unpaid White House positions doesn’t mean that the husband-and-wife team won’t see any financial gains from Trump’s presidency.

In a presidency besieged with questions about potential conflicts of interest posed by the sprawling nature of the Trump empire, the documents take on even greater weight, ProPublica reported. While the documents didn’t offer any new glimpses into President Donald Trump’s personal holdings, the forms did offer important information on stock ownership, real estate assets, and business values for his closest confidantes.

That includes Ivanka Trump and Jared Kushner. The pair have been charged with leading some of the most far-reaching aspects of Trump’s agenda: Ivanka has been shepherding much of the president’s legislative strategy, most notably his position on the child tax credit and paid parental leave, while Kushner has been tasked with managing Trump’s agenda on trade, government reform, and diplomacy. And while the title “senior adviser” comes with a White House pass and West Wing office, the pay is normally nowhere near what someone with those skills could get in the private sector. For comparison’s sake, President Obama’s senior White House advisers earned a top salary of $172,200 per year (though one key staffer tasked with crafting the former president’s approach to housing finance, earned $225,000 on 2013, according to Reuters).

The power couple have both said that they will decline the government paycheck. But, if the financial disclosure forms are accurate, they could stand to gain far more from their connection to the president. Ivanka Trump retains stake in the Washington, D.C. Trump International Hotel, an investment that is valued somewhere between $5 million and $25 million, The Times reported. And an Associated Press analysis of Kushner’s financial disclosures showed that despite resigning from 260 positions within the web of partnerships and companies that make up the family’s multibillion-dollar enterprise, Kushner will continue to benefit from those businesses, as well as hundreds more investments in Trump real estate and development deals.

Of course, federal law bars government employees from using their position and privilege for personal gain. But with networks of partnerships and businesses in their purview, ethics experts have grappled with how to define personal gain for the Trump family. Ivanka Trump and Jared Kushner have stepped away from the family business in favor of public service. But depending on how well those businesses fare under Trump, the payoff to their portfolios will almost certainly be greater than the combined $344,000 salary the government might have offered.