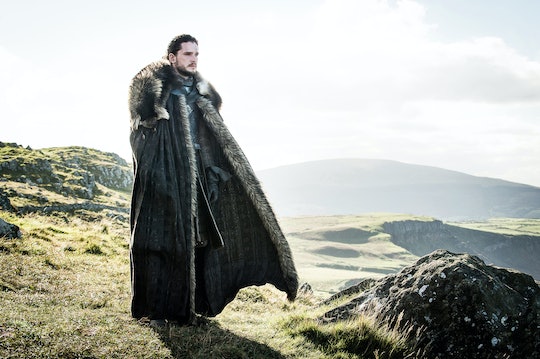 Everyone who watches Game of Thrones is now aware that Jon Snow's real parents were Lyanna Stark and Rhaegar Targaryen, which makes him Dany's nephew. Everyone, that is, except the characters themselves. So how will Jon Snow and Daenerys find out they're related on Game of Thrones? And more importantly, will it be before or after they hook up? Because you know that is happening any day now.

At the end of Season 6 it was revealed that Jon Snow was born in the Tower of Joy, and his mother Lyanna made her brother Ned Stark promise to keep him safe, which meant hiding his Targaryen lineage. Now that Jon is King in the North and in the middle of trade negotiations with Daenerys, Game of Thrones watchers are just waiting for the big reveal, and theorizing about how it will happen. Theories range from the absurd to the improbably mundane, and some include the reveal of Jon Snow's real name, the name his mother gave to him at birth. Could Jon's real name have something to do with how he'll find out about his real parentage? Will Daenerys figure it out somehow first? Is the truth hidden somewhere in Dragonstone, like the chalk drawings Jon found in the cave? Here are a few ways this moment could play out...

The most obvious way that Jon could find out would be if his brother Bran tells him. Bran saw Jon being born in a vision with the Three-Eyed-Raven, and therefore knows the truth, but he doesn't appear to have told anyone. It seems unlikely that Bran would send this news to Jon via raven, like the world's most disturbing text message: "How are you? BTW your real parents were Aunt Lyanna and Rhaegar Targaryen. Miss you, bro! (Or should I say, cuz?)" But Bran hasn't been excellent at picking up social cues lately so who really knows.

Another theory about how he'll find out the truth has to do with a prophecy made to Dany: "To go north, you must go south. To reach the west, you must go east. To go forward you must go back, and to touch the light you must pass beneath the shadow." Almost all of this makes sense as it relates to Dany's travels. She went south to the city of Qarth and back, picked up her army in the east before going west to Westeros, and went back to Dragonstone where she was born. And when Dany asked what she will find "beneath the shadow" she is told "truth." People believe that this truth refers to the fact that she has a nephew named Jon who is currently giving her bedroom eyes beneath her castle.

My favorite and least likely theory is that Jon and Dany will suddenly have an epiphany when Jon comes face-to-face with one of the dragons, particularly Rhaegal, named after Rhaegar, Jon's real dad. The theory goes that the dragon and Jon will feel a sudden affinity for one another and everyone will realize that Jon must be a Targaryen.

However it happens, I cannot wait to see Jon's reaction once he realizes he's been checking out his own aunt.