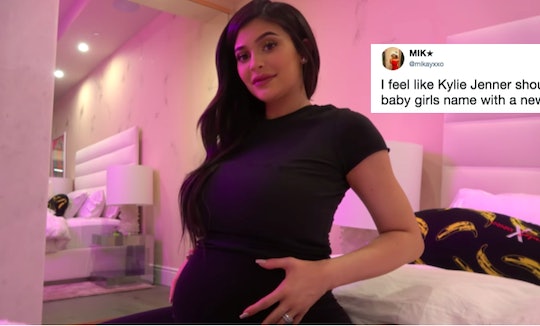 Now that Kylie Jenner has finally confirmed her pregnancy following the birth of her daughter, there is really only one more important detail we're still wondering about: her name. Jenner made up for her months of silence Sunday by releasing a beautiful 12-minute video documenting various intimate moments of her kept-under-wraps pregnancy, but for now, it seems like she isn't yet ready to share her baby's name with the world. How will Kylie Jenner reveal her daughter's name? Speculation is ramping up on Twitter, with some predictions seeming more likely than others. But some fans think Jenner's baby name reveal might end up also doubling as a creative marketing strategy, and honestly, it's a pretty cool idea.

Jenner's daughter made her way into the world on Feb. 1, but there may be one totally straightforward reason why we haven't learned her name yet: on Sunday, E! News reported that Jenner and her partner, Travis Scott, haven't actually picked one. But that hasn't stopped fans from coming up with all sorts of theories about the infant's name — Butterfly seems to be emerging as a front-runner — and many are also expecting the reveal to be seriously extra. One particularly noteworthy prediction? That the 20-year-old beauty mogul is actually planning on sharing her daughter's name on one of her signature Kylie Cosmetics lip kits.

All things considered, the idea is actually kind of plausible, especially since Jenner often gives her lip kits meaningful names. Jenner's Mary Jo K lip kit ("a true blue red," according to the Kylie Cosmetics site) was named after her red-lipstick-loving maternal grandmother, MJ, for example, while "deep beige nude" Dolce K was named after her beloved childhood dog. And of course, Jenner also honored big sis Khloé with a lip kit of her own, the pale pink Koko K.

So might Jenner's next lip kit offering be inspired by her baby girl? Twitter is pretty convinced it's going to happen:

And, who knows, there could be a whole baby-related lip kit line on the horizon:

Some are taking the theory a step further though by suggestion "Lip Kit" could actually be the infant's name (although, uh, maybe don't hold your breath on that one):

As iconic as that move may be though, Jenner has also given the world plenty of reasons to suggest that her seriously private pregnancy might be only the beginning. After all, not only did she take great strides to ensure she shared the news on her own terms and in her own way, she specifically discussed her desire to keep her pregnancy out of the public eye for the sake of both her own well-being and her baby's, and it seems unlikely that that would suddenly change now that her daughter has been born.

Then there's the fact that, even before she got pregnant, Jenner spoke about wanting to live a simple life away from the public eye when she did become a mom. In 2015 Jenner told Elle UK she didn't plan on maintaining her social media presence after having a child, according to E! News, and said, "You know, I'll probably delete my Instagram and just…I don't know, live life." Later that year, Jenner elaborated on what that life might look like, and told Interview magazine, "When I’m, like, 30, I want to go off the map, have a family, and live in Malibu with a farm, and just raise my own chickens."

Does that mean fans should expect the youngest KarJenner sister to soon call it quits on social media? Jenner hasn't given any indication that she actually intends to give up her high-profile status for farm life — and, to be fair, it sounds like she wasn't really expecting to become a mom for at least another decade when she made those comments. But anyone who has ever welcomed a child knows that parenthood also changes you in ways you couldn't ever truly anticipate, so it's entirely possible that Jenner might end up deciding she doesn't want to live her life in the spotlight anymore.

Given that Jenner comes from a family known for their often-over-the-top style (not to mention some very unorthodox baby names), it seems only natural to assume that she, too, is preparing to make a splashy statement with her baby name reveal — and what better way to make fans lose it completely than to announce the child's name on a lip kit? At the same time, Jenner's insistence upon maintaining privacy throughout her pregnancy suggests she could also continue to take a low-key approach to parenting, and that she might fully intend to keep her public life separate from her private life.

In other words, Jenner is still keeping fans guessing, at least for now. But if she does release a lip kit inspired by her daughter? You know it will be sold out in no time.