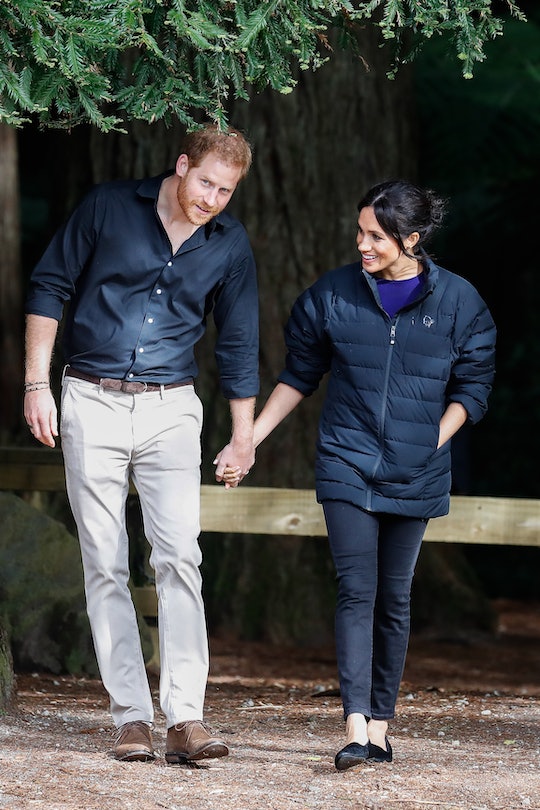 Christmas is over, and now it's time for the royal family to move onto the next holiday: New Year's Eve. A bit of drama surrounded Harry, Meghan, Will, and Kate's Christmas plans, so hopefully people are a bit more chill when it comes to the famous foursome's NYE routine. That said, how will Harry and Meghan spend New Year's Eve?

The royal couple has not publicly confirmed their NYE plans yet, but multiple news sources are reporting that the couple will spend the holiday at Sandringham. The Queen has a private country home on the Sandringham Estate in Norfolk, England, and that's where the royal family spent Christmas.

The Sun reported that Harry and Meghan will ring in 2019 either in Sandringham, or somewhere else near their home. This is pretty different than how the couple started 2018. As HuffPost reported at the time, Harry and Meghan spent last New Year's Eve in the French Riviera. The couple reportedly stayed at a private home in the South of France, where they celebrated the holiday with a group of friends, according to the Daily Mail. They made headlines at the time for flying economy on a British Airways flight from Heathrow to Nice, the Daily Mail added. The couple and their three bodyguards reportedly took up three rows on the plane. Royals — they're just like everyone else!

Taking all that into account, it totally makes sense that Harry and Meghan's rumored 2019 NYE plans are more low-key than last year, since Meghan is pregnant. She has yet to reveal her exact due date, but she is expected to deliver sometime in the spring. When Kensington Palace announced her pregnancy in mid-October, the tweet read:

According to the Centers for Disease Control and Prevention (CDC), most commercial airlines will allow women experiencing healthy pregnancies to fly up until their 36th week of pregnancy. However, expecting mothers should always check with their doctors before flying, the Mayo Clinic warns, for a few reasons. For one thing, there is a chance air travel can worsen pregnancy complications, the Mayo Clinic explained. Additionally, being on an airplane may mean you won't be able to get immediate medical attention should you need it; plus, flying far from home could put you at the risk of having to deliver at an unfamiliar hospital with a doctor you don't know.

Even though springtime is still a few months away, it seems like a good call for Meghan to stay close to home, should she want access to her doctor over the holiday.

As The Sun reported, royal commentator Richard Fitzwilliams believes Kate, Will, and their three children will celebrate NYE at Kate's parents' house in Berkshire. Since the family of five spent Christmas with the royal side of their family, it's only fair that they'll be ringing in the new year with Kate's family.

Here's hoping the royals share photos from the NYE celebrations, even if it's just a low-key night at home.