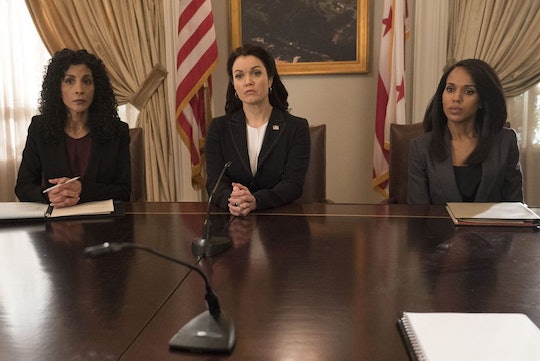 How Will 'Scandal' End? Here's How The Beloved Drama Could Wrap Everything Up

After seven seasons filled with twists, affairs, murder, and more, Scandal is coming to an end. The Washington, D.C.-based drama that followed political fixer Olivia Pope has garnered millions of fans over the years who have become obsessed with the show's drama and attached to its characters. But how will the writers wrap everything up? How will Scandal end?

Seeing as how this show loves to throw fans curveballs, it's obviously difficult to guess how the show will come to a close, but there are at least some questions the series finale will surely answer. For instance, will Olivia and Fitz end up together? Will Mellie be impeached and Cyrus becomes president? Will Jake really be Cyrus' right hand man or end up killing him like he killed Vanessa? And can Mellie and Marcus ever be together for real? Also, where did Papa Pope end up?

Hopefully, before the show comes to an end, fans will learn all this and more. And even though it'll be difficult to say goodbye to the series, hopefully fans will be satisfied with how Olivia's story ends. For now though, here are just a few possibilities for how Scandal might close out its seven season run. You may be surprised by some of these theories.