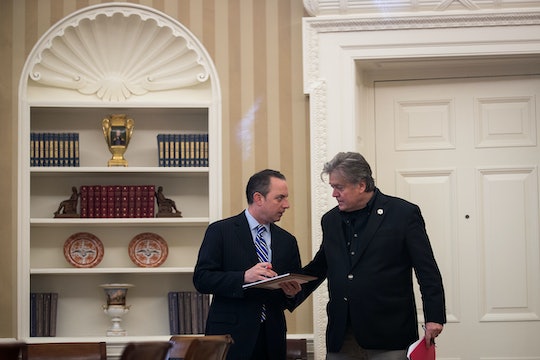 How Steve Bannon Will Interact With The NSA

On Sunday, President Donald Trump took an unprecedented step with one of his many executive orders: He made his chief White House strategist, Steve Bannon, a member of the National Security Council. Since its creation by President Harry S. Truman in 1947, there has never been a political adviser gathered around the table with the president and some of the highest members of the Cabinet. More concerning still is that President Trump removed two seats from the table in that same executive order — the chairman of the joint chiefs of staff and the director of national intelligence. Given that the national intelligence director was just kicked out of the Situation Room, how will Steve Bannon interact with the NSA?

The answer isn't entirely clear. The White House did not immediately return Romper's request for comment. All the American people have to go by is what has been shared via White House Press Secretary Sean Spicer, and any official communication from the White House — which is to say, not much.

Bannon doesn't have a background in national security and boasts just seven years in the U.S. Navy to his credit. But outside of some work in Hollywood in the 1990s as a producer, and at the helm of far right-wing website Breitbart News — Bannon's seat at the National Security Council table really doesn't make a whole lot of sense. Even Arizona Sen. John McCain questioned why Bannon is on the National Security Council on Sunday's Face The Nation.

Now, why would Bannon's interaction with the NSA even matter in the first place? Given that the director for national intelligence served as the intelligence adviser on the council — and who oversees the National Security Agency — it would appear that if Bannon is going to interact with the NSA, it won't be sitting at the National Security Council table. Given the surprising appointment of a political strategist to the council, it's not certain just how Bannon will interact with the NSA simply because this situation has never happened before. There's even less clarity now that the sole intelligence adviser was permanently removed by Trump from the Principals Council — the most elite advisers of the security council. Now, what's even more concerning is that the National Security Council is the most influential group of advisers to the president on matters of national security and foreign policy.

And if you think Bannon is just there to be eyes and ears for Trump, you'd be wrong. He's already shown that he intends to influence policy. In 2013, Bannon spoke to a writer for The Daily Beast in 2013 and said:

I’m a Leninist. Lenin wanted to destroy the state, and that’s my goal, too. I want to bring everything crashing down, and destroy all of today’s establishment.

Bloomberg News called Bannon "the most dangerous political operative in America" in mid-2015. Speaking to Vanity Fair in November of last year, Bannon called Trump a "blunt instrument for us. I don’t know whether he really gets it or not." Well, isn't that confidence-inducing.

But wait, it gets even more chilling: In a CNN report, it was revealed Saturday that Bannon personally advised the president to include green cards in his temporary immigration ban — against the legal recommendations of the Department of Homeland Security. While Bannon's involvement with the NSA remains to be seen, there's no denying that his seat on the National Security Council represents a major — and deeply concerning — shift in how the president intends to stay informed on matters of national security.