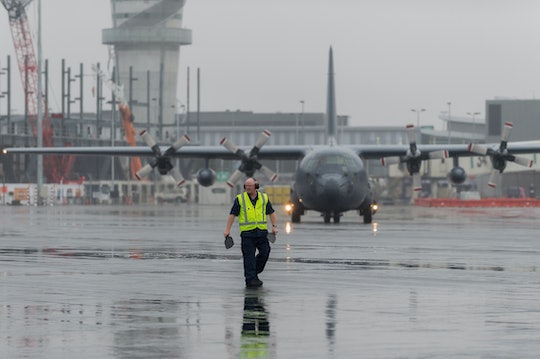 If you're a parent who has traveled with young children recently, you know how much of a saving grace a good old tablet can be in terms of keeping your kids occupied (and keeping your fellow passengers from shooting you dirty looks). So on Monday, when news broke that government officials were reportedly banning certain electronics on international flights from specific countries, it left some families feeling a little worried. How will the air travel electronics ban affect parents? The good news is that it seems like the ban will only be temporary, and won't directly affect everyone.

The ban, which is set to be officially announced on Tuesday, according to Reuters, comes in response to an unspecified terrorism threat. It doesn't affect cell phones or medical devices, just larger devices like tablets, cameras, and laptops, which will have to be placed in checked baggage. According to a tweet by Fox News National Security Correspondent Jennifer Griffin, the ban will apply to travelers flying to the United States from 13 countries for the next 96 hours, and no American carriers will be affected.

Following instructions from the concerned U.S. departments, we kindly inform our dearest passengers departing to and arriving from the United States that carrying any electronic or electrical device on board the flight cabins is strictly prohibited.

CBS News later knocked the number of countries included in the electronics ban down to 8, all located in the Middle East and Northern Africa.

Essentially, if you're traveling with your kids in any of the affected areas in the next few days, this ban is definitely not ideal. But hey, it's a small price to pay in exchange for safety. At least you'll still have your cell phone, and hopefully you'll be traveling on an airline with those individual seat-back televisions, so your kid can just watch Zootopia on repeat.

And if all else fails, you'll just have to get inventive, and try to remember all the way back to a decade ago, before everyone was used to having screens all the time. (Have our lives really changed so much, so quickly?) There are plenty of tips for keeping your kids entertained on airplanes, too: Try picking up a deck of cards and teaching your kids the fine art of Go Fish, or really diving deep into that eternal mystery — where is that rascal Waldo? Even a simple tub of Play-Doh can be a lifesaver with a certain age group (just be sure to clean up well for the already stressed-out flight attendants).

Who knows? Maybe it'll turn out to be fun. And if not, the restrictions should be lifted pretty soon.