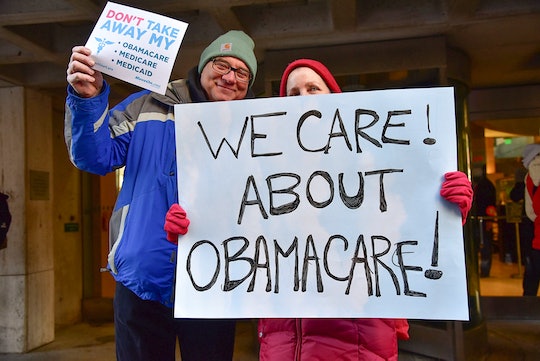 Ever since President Donald Trump was elected in November, Americans have been waiting — some with happy anticipation, some with dread — for the repeal and replacement of the Affordable Care Act (ACA), also known as Obamacare. On Monday, House Republicans unveiled a draft of a health care bill, The American Health Care Act, that sets forth the parameters of a replacement plan. So just how will the American Health Care Act affect parents? The details are still sketchy, but a few provisions in particular will definitely impact American families with children.

According to The Washington Post, the bill preserves a key provision from Obamacare, namely that young adults can receive coverage under their parents' health insurance plan until the age of 26. This was a provision with bipartisan support, and many families are surely breathing a sigh of relief over news that the provision will be maintained. For lower-income families, though, the bill's treatment of Medicaid coverage offers less relief. The bill will cap the expansion of Medicaid, an expansion that many states opted into under the ACA. CNN reports that changes to Medicaid "could result in millions of people losing access to insurance they received under the Affordable Care Act."

The Medicaid issue might prove to be the linchpin that determines whether this bill will pass muster in the Senate. According to Mother Jones, four Republican senators sent a letter to Senate Majority Leader Mitch McConnell Monday afternoon, stating they would "not support a plan" that will result in their constituents losing Medicaid coverage. Under the American Health Care Act, the ACA's Medicaid expansion would be maintained through 2020, at which point the new plan calls for a "freeze" on enrollment. According to Vox, inclusion until 2020 is "a big shift from previous drafts of the legislation, which ended Medicaid expansion immediately."

Access to Medicaid coverage is especially vital for American parents. According to a 2015 analysis by the Kaiser Commission on Medicaid and the Uninsured, "Medicaid’s most well-recognized role in our health care system is as a health coverage program for low-income pregnant women, children, and families." Recent numbers show that more than one-third of American children are covered by Medicaid. Under the ACA's Medicaid expansion, which was adopted in 31 states, 10.7 million Americans gained access to Medicaid, 3.4 million of them children.

Another major way that the so-called American Health Care Act might affect parents is that beginning in 2020, insurers will no longer be required to fulfill the "essential health benefits package," which was a major, important new requirement under the ACA. These "essential benefits" include maternity services and pediatric care. According to Vox, if insurance carriers drop these services from their cheaper plans in 2020, "it could leave someone who wants, say, health insurance to cover her maternity costs completely out of luck."

Other "essential benefits" under the ACA that might be phased out under the American Health Care Act include dental coverage for children, ambulatory care, pregnancy and newborn care, breastfeeding coverage, birth control coverage, and basic preventive and wellness services. Looking at the list of "essential benefits," it's easy to see why critics of repealing the ACA have argued that women and children gained the most under the ACA, and have the most to lose.

For now, the draft of the American Health Care Act is just that — a draft. It faces an uphill battle in Congress, and Senate Minority Leader Chuck Schumer has already coined the phrase "Trumpcare." Whatever the future holds, American families will be following the developments closely.

More Like This
Everything Parents Need To Know About Monkeypox
Can You Have Sex With Placenta Previa? Experts Explain
Dr. Jill Biden Just Delivered Some Frank, But Powerful, Advice On Motherhood
Reddit Applauds Mom Of Five Who Stood Her Ground & Left Sleeping Dad Behind