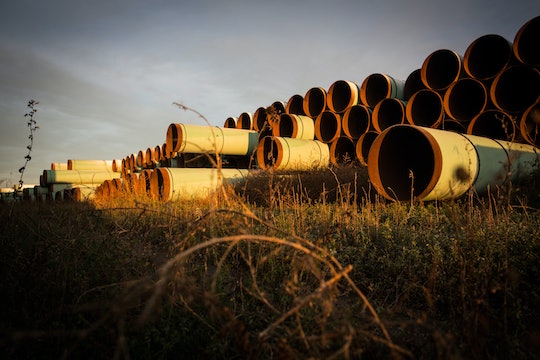 How Will The Dakota Access Pipeline Affect The Environment? Standing Rock Needs Answers

The pipeline is designed to transfer crude oil through four states: North Dakota, South Dakota, Iowa, and Illinois. A section of the pipeline was routed only a half mile from the Standing Rock Indian Reservation, underneath the Missouri River in North Dakota. The pipeline's proximity to the reservation could have serious, lasting impacts to both Native American culture and environment, as an oil spill could affect the reservation's water supply. But according to the U.S. Army Corps of Engineers, the federal agency that has given Energy Transfer Partners the go-ahead to proceed with construction, the Dakota Access Pipeline will have no significant impact on its surrounding environment — all 1,134 miles of it — but only if you look at it in half-acre increments.

In January, the Corps permitted Energy Transfer Partners' plans to construct the nearly 1,200 mile-long pipeline. The Standing Rock Sioux Tribe balked at the approval, and filed suit against the Corps and sought an emergency injunction to halt the pipeline's construction through Emmons, Morton, and Williams Counties in North Dakota, where the pipeline would be closest to the reservation's water supply.

Three federal agencies finally stepped in: the Department of Justice, the Department of the Interior, and the Environmental Protection Agency. Citing compliance with the National Environmental Policy Act, these agencies ordered the Corps to complete a more detailed environmental assessment. Instead, the Corps steamrolled through its second review by using a fast-track "loophole" known as Nationwide Permit 12. Speaking to The Huffington Post, Sierra Club staff attorney Doug Hayes explained how the Corps conducted its environmental assessment of the proposed pipeline route using the Nationwide Permit 12 process:

It’s essentially a blanket permit for pipelines up to a half-acre of impact, a pre-issued permit. The Corps has begun treating these 1,200-mile pipelines like a series of half-acre projects that each qualify under that exemption. This is a general permit that doesn’t mention oil spills or climate impacts and never talks about Native American tribes and cultural significance and sacred sites.

In the Corps' environmental assessment from July, Col. John W. Henderson, P.E., stated that the Dakota Access Pipeline construction "does not constitute a major federal action that would significantly affect the quality of the human environment." Henderson further stated that a more thorough Environmental Impact Statement was not required.

Further complicating the situation is the sale of Cannonball Ranch, privately-owned farmland along the Cannonball River, adjacent to the reservation; it is known to host both known and unknown Native burial sites. In late September, Cannonball Ranch was sold to Dakota Access LLC, a subsidiary of Energy Transfer Partners. According to The Huffington Post, it's alleged that the Corps knew of the Cannonball Ranch sale before it even happened but only alerted the Standing Rock Sioux Tribe with vague language about where they can and cannot protest on federal land in a Special Use Permit.

When asked for comment, a spokesperson for the Omaha division of the U.S. Army Corps of Engineers referred Romper to a Dakota Access Pipeline statement from the Department of Justice on Oct. 10. Energy Transfer Partners did not immediately respond to Romper's request for comment.

Officially, the Dakota Access Pipeline will have little to no environmental impact — especially when the permitting agency doesn't take more detailed environmental assessments into account. And after 10 different pipeline accidents in North Dakota since 2000 alone, the Standing Rock Sioux Tribe has every right to demand more thorough answers when Energy Transfer Partners plans to pump an estimated 570,000 barrels of crude oil just a half mile from their water supply every day.