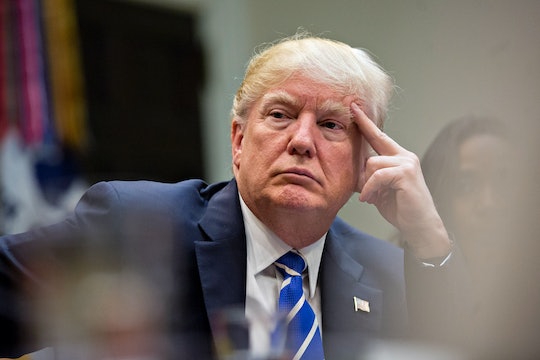 How The GOP Tax Overhaul Will Affect Working Moms

President Donald Trump campaigned on some big promises, including a reform to the tax code. Now, he and his fellow Republicans are turning their attention to that issue and hoping to make sweeping changes, but there's a hitch. The recent health care failure changed a lot of things, including how the GOP tax overhaul could affect working mothers.

Reforming the tax code is not an easy task. The last time the government was able to produce an overhaul was 1986. Still, during the campaign, Trump proposed a major change, and he seemed to have momentum on his side, along with Republican control of both chambers of Congress. The Trump tax reform plan aims to close loopholes and give a large tax cut to the wealthy, along with a smaller cut for middle class taxpayers. Speaker Paul Ryan, meanwhile, has been working on a similar tax plan with some of his fellow representatives, although his blueprint does less for middle class families, while also including a 20 percent Border Adjustment Tax on imports that would ideally compensate for the revenue lost from giving out large tax cuts. (The Trump plan would be more likely to add to the federal debt.)

The proposed tax cuts in Trump's plan could be good for working mothers looking to save money wherever possible and put those funds toward their families, although not as good as they would be for the very wealthy, while the Border Adjustment Tax could be very bad, as it would raise the cost of necessary items like gasoline, clothing, and food.

However, The New York Times pointed out that, given the failure of Republicans to pass health care reform last week, a major overhaul of the tax code now seems unlikely. If Republicans want to pass tax reform without it being filibustered by the Democrats, they will have to do it through "budget reconciliation," which says that a plan cannot add to deficits over a period of 10 years. Passing the new health care plan would have helped save the government money and offset some of the large tax breaks Trump wants to give, but, even after years of complaining about Obamacare and promising to fix it, Republicans could not manage to agree on a better solution.

So now, separated into factions and recovering from an embarrassing defeat, it will be tough for Trump and congressional Republicans to do everything they wanted to do with tax reform. They may have to choose between priorities, and it would not be shocking if they privileged big corporate tax cuts over smaller cuts for the middle class.

In the end, working mothers might also face more problems than solutions; Whatever savings any tax plan might allow them could still be offset by cuts to arts and educational programs cut in the general proposed 2018 budget — school voucher programs too could hurt public schools where they send their children, and the public programming they've come to rely on to keep their kids occupied while finishing up work or prepping for the next day could be scrapped under a depleted NEA and slashed PBS plan. In short, whatever minuscule gains might be made under the GOP's tax reform could be rendered moot in terms of quality of life and a working mom's ability to keep her household running smoothly.

We'll have to wait and see if Republicans can manage to come together and pass tax reform that helps working mothers in any significant way. At the moment, though, it's not looking likely.