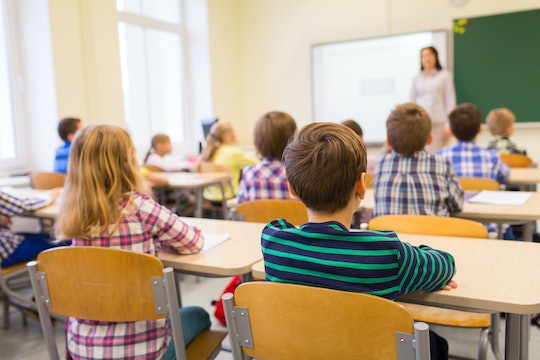 President Donald Trump signed the tax bill on Friday, in the most significant overhaul of the United States' tax system in decades. Trump signed the bill in a "last-minute" ceremony in the Oval Office, despite rumors that he would wait to do so until early 2018 to delay automatic spending cuts that might have been triggered by the tax cuts. And though a lot of parents and families might be preoccupied with preparations for the holidays and late Christmas shopping, it's still important to pay attention to what this tax bill will mean for families and children — specifically, how the new tax plan will affect schools. Because no matter how you look at it, they will be affected.

Terry W. Hartle, the senior vice president of the American Council on Education, which represents colleges and universities, told The Washington Post that the changes to the tax system when it comes to education could have been worse. Hartle said:

On balance, the final bill is far better news — especially for students and families — than it could have been.

But there are still some major changes that have public school advocates, especially, denouncing the new bill. It reportedly includes provisions that could hurt public school funding, for starters. Meanwhile, parents who send their children to private schools could get tax breaks for doing so.

The tax bill "includes reductions of the deductions taxpayers can make for state and local taxes," according to ThinkProgress. By doing this, the federal tax burden on individuals will increase, and some advocates are concerned that states, counties, and school boards will have trouble raising money for schools that previously got most of their resources from state and local tax revenues, The Washington Post reported.

The bill also includes provisions that would expand 529 savings plans that were previously only used for higher education to cover the costs of private, K-12 schools, ThinkProgress reported. The expansion of 529s would benefit mostly wealthy families, according to Neil Campbell, director of innovation for K-12 Education Policy at the Center for American Progress. Campbell told ThinkProgress:

Many states offer deductions and credits for 529 contributions and this could mean that people could deduct from state income tax contributions, basically pay their kids’ tuition a year in advance into a 529, and get a tax deduction for doing that. So it’s private school tuition but only for people wealthy enough to afford private school tuition a year early.

The bill will also end Qualified Zone Academy Bonds, according to Education Week. This could impact the charter school community, because advocates there say the zone academy bonds help charter schools find facilities.

But no worries if you're a sports fan, because a late change to the bill saved a tax exemption for bonds that pay for the construction of sports stadiums. The exemption was in danger in a previous version of the tax bill. Not sure why that would be considered important compared to public school funding, but it was a priority for Trump, according to The Wall Street Journal.

And there is a bit of good news in the tax bill for teachers. Starting in 2002, Congress gave educators who used their own money for school supplies a $250 tax break, but the House version of the latest bill was going to eliminate that. The Senate wanted to double the deduction to $500, and ultimately, the final plan secured the $250 deduction, according to The Washington Post.

A measure included in the House bill would have also turned graduate students' tuition waivers into taxable income, causing an astronomical increase in what they would owe in taxes every year. Currently, using tuition waivers, some students' tuition is covered, and the money isn't taxed, provided the student does research or teaches for the university. The student never sees the money, according to CNN Money. And under the original House plan, those students would have been taxed for that waiver money — which, again, they never actually see or use for anything other than tuition — because it would be treated as income.

The loss of the student loan interest deduction or the change in the way tuition waivers are treated when it comes to taxes could have been a huge blow to graduate level education.

No matter what type of school a child is enrolled in, parents should be aware of the changes the tax bill made when it comes to schools. Public, private, and charter schools could all be impacted, for better or worse.