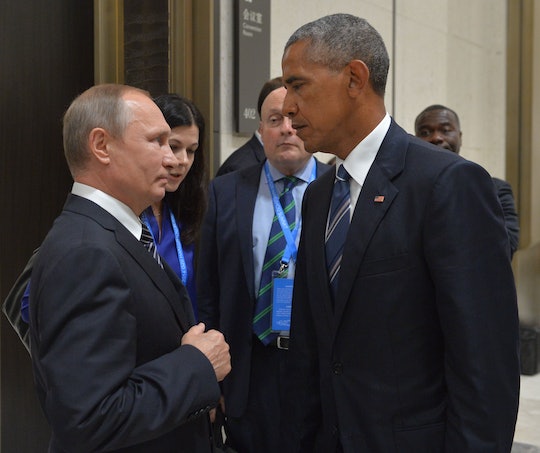 Nearly two weeks ago, President Barack Obama promised that Russia wouldn't go unscathed for its meddling in November's elections — and now, according to The Guardian, his administration could be announcing new sanctions on Moscow as soon as Thursday. With little time left before the slightly more Putin-friendly President-elect Donald Trump takes office, Obama's time to retaliate is dwindling. So what exactly can Americans expect as a response from the Obama administration to Russian hacking claims between now and then?

According to official sources who spoke with CNN, the Obama administration is planning to retaliate with increased sanctions and diplomatic measures that are proportional to the alleged hacking. Earlier this month, Obama told NPR:

I think there is no doubt that when any foreign government tries to impact the integrity of our elections ... we need to take action. And we will — at a time and place of our own choosing. Some of it may be explicit and publicized; some of it may not be.

Some officials also believe the United States' retaliation needs to be quite public. "The idea of telling Russia, ‘we know it’s you and we might do something about it,’ the idea that that is sufficient in this case, I just don’t think that’s the case," Susan Hennessey, a national security fellow at the Brookings Institution, told Bloomberg. "I think the White House has indicated that they recognize this is an area in which at least a partially visible and really quite consequential response is required."

However the Obama administration decides to retaliate, though — and regardless of whether it chooses to do so publicly or privately — it should be prepared for retaliation in return, according to an official representative of the Russian Ministry of Foreign Affairs.

"If Washington really does take new hostile steps, they will be answered ... any action against Russian diplomatic missions in the US will immediately bounce back on U.S. diplomats in Russia," Maria Zakharova said in a statement, according to CNN. "Frankly, we are tired about the lies about Russian hackers — it's misinformation by [the] Obama administration aimed at providing an excuse for its own failure."

According to reports, we should be finding out soon enough what measures the Obama administration has decided to take. Judging by Russia's response to American threats of retaliation so far, it also sounds like we'll be learning about Russian retaliation soon after.