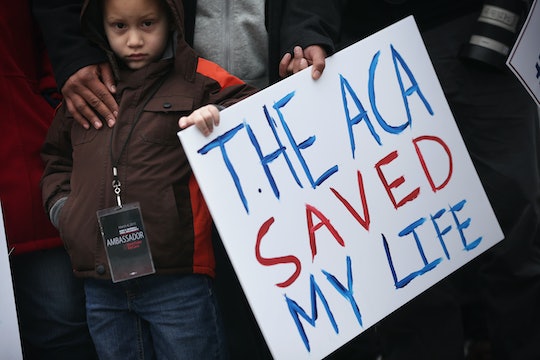 How The ACA Repeal Will Affect Low-Income Families

With only four days until the presidential inauguration, Senate Republicans have been busy, putting into motion the first steps they'll need to begin dismantling one of the nation's most comprehensive, if controversial, healthcare and insurance mandates. There's no doubt that repealing Obamacare will affect millions of Americans who could finally access health insurance, but a repeal will hurt some communities more than others. How will the Obamacare repeal affect low-income parents, for example? The impact of repealing Obamacare for low-income families has the potential to be devastating.

An estimated 20 million people gained health insurance coverage that they never had before since the Affordable Care Act — known commonly as "Obamacare" — was enacted in 2010, according to the Department of Health and Human Services. More impressive still is that the ACA has subsequently reduced the number of uninsured Americans to an all-time low. In short, if Obamacare is repealed, there is no doubt that healthcare costs for all Americans are going to go up — except for America's wealthiest, who stand to benefit millions with the elimination of certain federal tax credits on the wealthy that help fund healthcare subsidies.

According to The Motley Fool, one of the first things that will go with the repeal is the Advanced Premium Tax Credit. The APTC is a subsidy for monthly health insurance premiums, and is only available to households earning less than 400 percent of the federal income poverty level. Families utilizing the APTC could buy health insurance for under $100 a month, but if Obamacare is repealed, they could be responsible for the full cost of their premiums, which could be in the hundreds of dollars per month. As Chicago Tribune writer Matt O'Brien put it in December, "It's a reverse Robin Hood. It's taking tax subsidies from the poor to give as tax cuts to the rich."

Preexisting Conditions Could Take Their Toll On Low-Income Families

One of the most celebrated features of the ACA is that insurance companies could no longer deny coverage based on preexisting conditions. A preexisting condition within the context of the ACA is any health condition someone has before they gained insurance coverage. Socioeconomic status is linked to health and physical wellbeing. Low-income communities have higher rates of obesity, diabetes, heart disease, high cholesterol, and depression — in addition to many barriers to health care access beyond just cost of care. Low-income families where any member had a preexisting health condition were finally able to gain access to health insurance, but could lose that access if the ACA is repealed.

Oh, and anyone with insurance through Obamacare can kiss free preventative screenings goodbye, too — further impacting the long-term health for low-income parents and their children.

Take a moment to put yourself in the shoes of a low-income parent. When every paycheck determines whether your family gets to eat for the week, every single dollar counts. As any parent knows, kids get sick — unpredictably and often at the worst times. If your whole family gets the flu, it's considerably cheaper just to take your kids to their pediatrician rather than seeing your own primary care physician — one co-pay instead of two.

But what if it's something more than the flu for you — or god forbid, worse? Tests and procedures that would have been covered under Obamacare are no longer affordable, so it's easier to put those off for yourself in favor of making sure your child stays healthy. Or maybe you start making medical decisions for your children about if they really need to go to the doctor, and hope it doesn't get worse.

This has been reality for low-income families with little to no insurance before the ACA — and still is for those who still don't have insurance. But for all those low-income families who no longer had to make these painful choices for their families thanks to the ACA, it's a desperate reality that could come back with a vengeance. Repealing Obamacare will not only hurt all Americans, but it will hit the poorest American families the hardest.