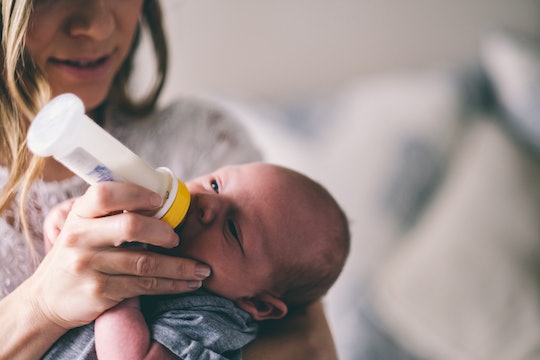 How The Personhood Bill Will Affect LGBTQ Families

In his first week in office, President Donald Trump has already signed four executive orders, including one that reinstated the so-called "Global Gag Rule" preventing foreign groups who provide abortions — or even advise women about abortions — from receiving federal funding. It's a step forward for the GOP's anti-abortion agenda, but it is certainly not the only one concerning reproductive rights advocates. On Jan. 17, Georgia Rep. Jody Hice reintroduced The Sanctity of Human Life Act to Congress, which would grant fertilized eggs the right the life under the Constitution. Although that would obviously have a huge impact on abortion rights, it would affect people trying to have children, too. How will the personhood bill affect LGBTQ families? It could restrict access to reproductive technologies, like in vitro fertilization.

The Sanctity of Human Life Act — which is currently backed by 21 additional representatives, all of whom are male — is based on the assertion that "each human life begins with fertilization, cloning, or its equivalent, at which time every human has all the legal and constitutional attributes and privileges of personhood." In terms of abortion restriction, that would mean that as soon as an egg is fertilized (which takes place even before implantation, at which point a woman is actually considered to be pregnant), that egg is entitled to the right to life, and thus, termination can no longer legally be an option.

But even if, presumably, the GOP believes that legislation is necessary to ensure that "irresponsible" women don't get pregnant unintentionally and decide to have abortions (a belief, in itself, that is incredibly offensive and wrong), the Sanctity of Human Life Act would create significant consequences in other situations, too. After all, even women who get pregnant intentionally who very much want to raise their babies could be medically advised to terminate due to fetal abnormalities or a host of other complications during pregnancy, but if their fetuses are people under the law, they'd have to continue carrying them regardless. Beyond that, there are the tens of thousands of couples and single people each year who rely on eggs fertilized in petri dishes to give them a shot at becoming parents, who could see it become increasingly difficult — if not impossible — to actually do so.

According to RESOLVE: The National Infertility Association, assisted reproductive technology like IVF is responsible for one out of every 100 births in the United States. And while it's often thought of as an option for heterosexual couples experiencing infertility, it's also an invaluable resource for same-sex couples who want to become parents. The problem though, is that making conception the legal beginning of personhood would essentially also make it illegal to destroy or freeze unused embryos during the IVF process.

During a typical IVF cycle, about eight to 10 embryos will result, with one or perhaps two actually transferred, according to CNN. The rest are frozen, but if they are entitled under the Constitution to the right to life, that may no longer be allowed. What's more is that, given the fact that IVF is inherently considered a risky procedure for the embryo itself (the success rate is about 40 percent for a women under age 35, according to Attain Fertility), it's questionable whether IVF would even be legal at all, given that the life of the embryo would legally need to be protected like any other human being.

According to Arthur Caplan, a medical ethicist at New York University’s Langone Medical Center, making conception the basis of personhood would definitely have far-reaching consequences as far as reproductive medicine is concerned. As he explained to Politifact in 2012 (aka, the last time the GOP was trying to pass the personhood bill in Congress),

If this law passed, it would not outlaw IVF, but it would make it next to impossible to do. It would not allow any destruction of embryos, and since nearly all IVF depends on the overproduction of embryos the law would drastically alter how IVF is done, raising the cost of doing it and hugely decreasing the success rate.

Then there's also the fact that the personhood bill could potentially open the door for doctors to face criminal charges related to IVF practices — something that could bring the industry to a halt, even if IVF itself isn't banned. As North Dakota reproductive endocrinologist Kristen Cain, M.D., explained to Medium in 2014,

Once we have a fertilized egg and that egg is now considered a person, we could be held criminally liable for murder if something happened to that fertilized egg.

Harvard professor and bioethicist I. Glenn Cohen agrees. He told Politifact that the passing of the personhood bill would ultimately mean that "the destruction of a human species member after fertilization can be criminalized and treated equivalent to killing an already-born human being." And if you're a doctor specializing in IVF? You are likely not going to want to continue if it means you could be held responsible under the law for taking a human life.

For same-sex couples or any LGBTQ family or single person relying on reproductive technology to have children, The Sanctity of Human Life Act could make it extremely difficult for them to actually do so. And while other options, like adoption, would still technically exist, the continued push for laws advocating for "religious freedom," already make that a challenge. Even as recently as this week, Oklahoma filed House Bill 1507, which, if it passes, would allow any private agencies that place children for foster care or adoption to refuse a placement based on a religious objection, according to LGBT Weekly. And even though that would essentially make it legal for adoption agencies to discriminate against LGBTQ applicants, they would still being entitled to government contracts and taxpayer funding.

There are many reasons why The Sanctity of Human Life Act is problematic, and the fact that it's once again being put forth is pretty heartbreaking. But for LGBTQ couples, it represents yet another attempt by government to keep them from having the same opportunities as heterosexual couples, and that just makes it worse.