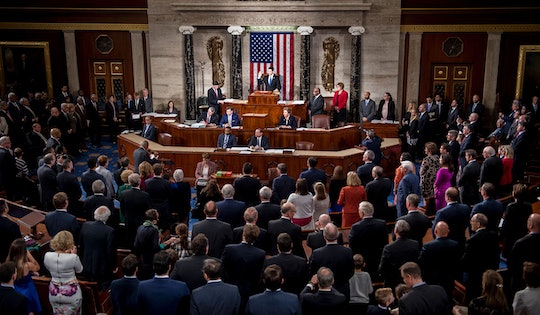 How The Personhood Bill Could Affect Women Legally

While everyone has been sharing memes and shots of the crowds at President Trump's inauguration, Congress has been quietly passing a handful of bills that directly take aim at a woman's right to choose what she does with her uterus. This week, for example, Republicans in the House of Representatives passed H.R. 586, a divisive "personhood" bill that has drawn heavy criticism from reproductive rights advocates. But just how the personhood bill will affect women legally remains to be seen.

The legislation, known colloquially as the Sanctity of Human Life Act, states that life begins at fertilization. It states that "the life of each human being begins with fertilization, cloning, or its functional equivalent, irrespective of sex, health, function or disability, defect, stage of biological development, or condition of dependency, at which time every human being shall have all the legal and constitutional attributes and privileges of personhood." So, as soon as a woman's eggs meet with just the right sperm and make an embryo: that's it. According to the bill, that's a human who has every right every other American has.

The legislation also has a provision that gives states the power to decide about when that embryo, or eventual fetus (which are two different things) becomes a person with rights. So we are talking about a bunch of governors deciding when, if ever, a woman is given the right to make decisions about her body.

Legally, H.R. 586, if passed in the Senate and signed by the president, would mean that every time a woman conceived, she would be in danger of obstructing another "human's" rights. So, legally, if the bill becomes law, it would mean that a woman who doesn't know that she is pregnant and has a drink or smokes a cigarette or does anything deemed unfit for pregnancy, could be, if strictly applied, endangering someone else's life. Any resulting miscarriage could be considered manslaughter. Same goes for anyone who wants to conceive via IVF.

The legal implications are endless.

Science — doctors and researchers and even high school Biology 101 — says that a fetus cannot live outside of a woman's womb until after at least 24 weeks. This personhood bill — H.R. 586 — would mean that a woman who miscarries would be a criminal if she endangers an embryo at all.

Some legislators are all about this, especially Vice President Mike Pence — who, as governor of Indiana, worked tirelessly to pass legislation to ensure women in his state would bury aborted fetal tissue — because he believes fetal tissue is the same thing as a child. (It is not.)

If passed, the "personhood" bill could put women in jail — and that's unfortunate, because it proves, once again, that the law isn't about science. It's about an unnecessary conflict of moral opinion.