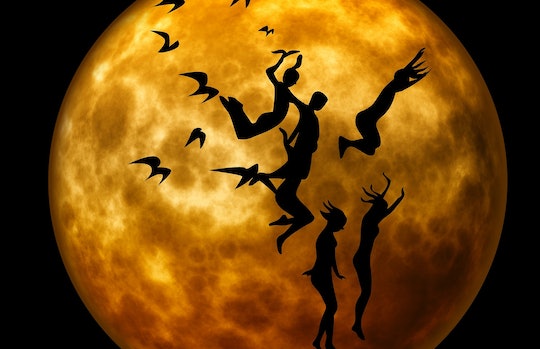 How Will The Supermoon Affect Your Kid's Behavior? It's Not As Scary As You May Think

If there's one thing that parents dread most, it's anything that could possibly throw off their kids' behavior. Days are hard enough to get through when all goes seemingly normal, but with an added obstacle, whether natural or man-made, they can be potentially impossible to endure. Knowing that we are having a supermoon on December 3rd may have you wondering how the supermoon will affect your child's behavior.

Despite generating mental images of a Where the Wild Things Are scenario, you can rest easy — the presence of a supermoon will likely not affect your child's behavior at all. There will be no terrible roars or gnashing of terrible teeth or rolling of terrible eyes (at least no more than usual). However, it could affect your child's sleep a teeny tiny bit. According to The Weather Channel, a study was done at the Children's Hospital of Eastern Ontario Research Institute that investigated whether a full moon disrupts sleep and whether it causes children to be more hyperactive. The researchers found that "sleep duration was 1 percent shorter at full moon compared to new moon, while activity behaviors were not significantly associated with the lunar cycle in this global sample of children." This amounted to a loss of about five minutes of sleep a night.

Is this enough sleep to be significant? Doubtful, though every minute of kid-sleep time is precious when they are young, especially for you. Five minutes could be the difference between getting to put on a bit of makeup, or going out barefaced, god forbid. It could be the difference between a beautifully made bed and a rumpled slept in bed. It could be an extra 300 peaceful seconds to enjoy your morning coffee.

So why would a supermoon affect a child's sleep? The thought is that because a full moon and particularly a supermoon, which is the result of the moon's orbit coming closer than usual to the earth causing it to look up to 30 percent brighter, lights the sky more, this could disrupt sleep. However, given that most kids sleep with a Pokemon night light or the bathroom light on, it's doubtful that they are awakened by a slightly brighter moon. If you are at all concerned about the potential of your little one losing these precious five minutes, you can at least try to minimize other sleep disrupters, like chocolate before bedtime or a pet that is eager to have someone to play with them in the morning — because five extra minutes is five extra minutes.

It's not a surprise that people worry that a supermoon will throw off their children. Popular culture and mom cliches support that. When a child's behavior seems a little more wonky, energetic or out there than usual, people often muse, "It must be a full moon." According to the Medical Daily, the Wall Street Journal reported that the majority of staff members at a hospital in Connecticut reported unusual behavior, or a lunar effect on nights with a full moon and police officers also comment that full moon nights keep them busier. This is all despite the fact that no scientific studies back up that assertion.

The only thing a supermoon might actually cause is a slightly higher tide, so if you are worried about oceans and lakes being a bad influence on your children, keep your kids steer clear of them on the nights of a full moon.

The bottom line is that a supermoon is not something to fear. Now that you don't have to worry about your kids' behavior being thrown off, use this opportunity to teach them something about astronomy. Visit a planetarium or buy a telescope and educate them (and yourself) about perigee (when the moon is the closest to the earth) and epigee (when the moon is the furthest from the earth) and any other astronomy facts you want to tack on.

And know that if the wild rumpus starts, it's absolutely not the fault of the supermoon.

More Like This
Can Elderberry Help Prevent Illness In Kids? Doctors Weigh In
What Is RSV?
Tips For Apple Picking With Kids
The Best Halloween Family Pajamas To Match Your Boos