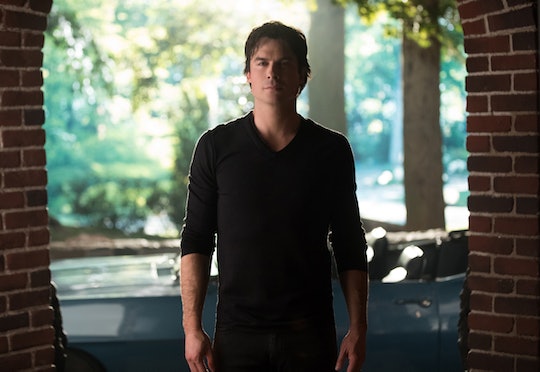 'The Vampire Diaries' Will Go Out With A Bang

Saying goodbye to a beloved TV show is never easy, and yet's it's something all Vampire Diaries fans are going to have to face in the very near future. But while viewers are mainly focused on the highly anticipated return of Elena (and now Katherine, apparently), I'm also just as curious to discover how the story of Mystic Falls will come to a close. How will The Vampire Diaries end?

These characters have been through quite the supernatural journey over the past eight seasons. From surprise doppelgängers and the introduction of the Mikaelson clan to actually finding a cure for vampirism, this series has kept us on the edge of our seats since practically Day 1. So what could they possibly have in store that could even attempt to top all of that? It seems like an impossible task, but one I'm sure it's one TVD will rise to the occasion for.

Sure, the series likes to try and keep post plot details close to the vest in order to leave fans shocked when each perspective episode airs, but that doesn't mean we don't know anything about what's to come. So let's take a moment and see if we can figure out how this upcoming finale is going to play out.

As Entertainment Weekly revealed last month, one of the final group scenes of the show will take place at a funeral — a funeral belonging to a main cast member that will undoubtedly leave many fans heartbroken at the tragic loss. We don't know who it'll end up being, but considering Julie Plec said "We wanted to go big, emotionally, with the action, and with the spectacular of it," I'd say it's going to put us through the emotional ringer. Have tissues at the ready.

Nina Dobrev Will Appear (Among Others)

And as an added dose of excitement, it seems she'll be returning not only as Elena, but as Katherine as well! Now that Cade is out of the picture, Katherine is apparently the new boss of hell (though we really shouldn't be the least bit surprised). That means we should be getting a double dose of Dobrev's incredible acting, which is never a bad thing. Not to mention, we'll also be seeing the return of Elena's baby bro Jeremy, John Gilbert, Vicki Donovan, and Tyler Lockwood as well. So get ready for an epic TVD reunion!

Bonnie & Kai Get A Spin-Off

OK so this last one is just a pipe dream of mine, but I honestly love the dynamic between these two and would be thrilled if this were to actually happen. The end of the show's final hour would be the perfect place to kick off their spin-off story, which should of course be called Bonnie and Kai (get it? like Bonnie and Clyde?). Just some food for thought, writers.

Either way, it's going to be tough watching our Mystic Falls gang take a final bow, but I suppose this gives me another excuse to binge-watch the entire series from start to finish on Netflix all over again.