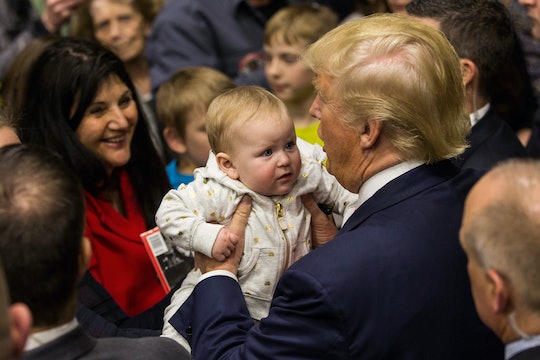 WIC Program To Be Cut In Trump's Budget

For low-income families, government-funded programs are a saving grace that puts food on an otherwise empty table. Under President Donald Trump's "America First: A Budget Blueprint to Make America Great Again," however, government aid of this kind would be cut. Mothers take note: WIC programs will be affected by Trump's budget proposal in a major way.

Cutting $200 million from the Women, Infants, and Children (WIC) program, Trump would be taking away funds from vital familial health initiatives, such as efforts "reducing infant and maternal mortality and morbidity," should his proposed budget be passed in its current state (that likely won't happen, but whether WIC programs will remain on the table following congressional debate is yet to be seen). It would also cut initiatives that "[provide] food vouchers for low-income pregnant women, nursing mothers, and children under five years old," as well as preexisting programs offering venues for "breastfeeding support and nutrition education."

(The Trump administration did not immediately respond to Romper's request for comment on the budget cut.)

The National WIC Association told The Guardian that the proposed cuts, thankfully, "are probably not significant enough to threaten WIC’s ability to provide vouchers for its current caseload." Still, other aspects of WIC are threatened, especially its local programs that provide parents with vital child-rearing information.

It should be acknowledged that, relative to its preexisting $6.4 billion budget, the WIC's $200 million cut can be seen as somewhat small decrease. But given the success of the program and its demonstrated ability to improve the health and lives of low-income families, the logical next step for lawmakers looking to improve the long term health and well-being of a population would be to expand these welfare programs, not shrink them. WIC reduces childhood obesity in promoting healthier nutrition habits through a variety of educational and tangible initiatives to mothers, both pre- and postpartum. Unfortunately, though, the trend has been to cut WIC funding over the years, diminishing its impact.

Now, it's up to Congress to either pass or reject the budget — an endeavor that's expected to cause quite the uproar. Still, providing education and nutritional resources for mothers and their children should be a no-brainer for lawmakers. The support given to patrons by WIC programs can bridge gaps for low-income families that are trying to promote healthy habits that extend for lifetimes.

One thing's for certain, though: Passing the blueprint as-is sends a loud and clear message that the health of women and children is not a priority of the Trump administration.

Correction: A previous version of this article stated that "low-income women who are pregnant, breastfeeding, or have children under 5 years old would have to go elsewhere for the support and services they've come to depend on." But, those who depend on WIC services likely won't be affected if WIC's caseload remains the same, as The Guardian reported.