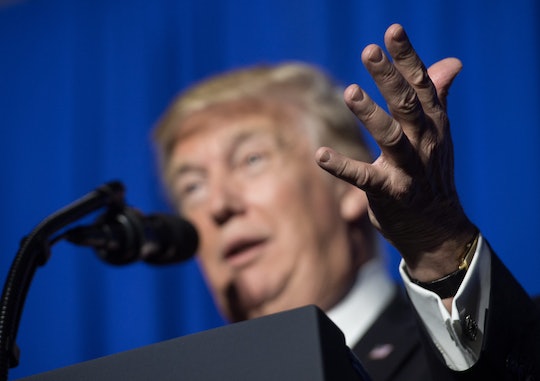 How Trump Will Affect Moms Who Are In School

President Donald Trump has been a busy bee since his inauguration on Friday. He's already signed in a slew of executive orders that threaten human rights, health care, the environment, sanctuary cities and so much more. In between all that, Trump has also started to move the needle on his student loan debt and child care proposals. These proposed plans have been met with critical praise, with some people convinced of their benefits. But how Trump will affect moms in school is not all positive.

On the surface, many of the president's policies in regard to mitigating child care costs and reducing student loan debt, respectively, seem to offer parents an advantage. He wants to give working parents tax breaks for child care expenses and help student borrowers pay down their debt faster by loosening forgiveness requirements. But, as with all actions Trump and his administration propose, there's a catch: Tax breaks would only help those people who could afford child care in the first place, while student borrowers would have to shell out more a month just to pay less in the end. If you're a parent in school, these two policy proposals combined may cause you much more pain than they would relief.

Will You Continue To Crumble Under Student Loan Debt?

Trump has vowed to tackle student loan debt with a multi-prong approach. But there are two aspects of his plan that would do borrowers well to pay attention to: income-based repayment plans and privatization of student loans. According to CNBC, Trump plans to combine the two current income-based repayment plans that would raise monthly payments, but allow debt to be forgiven sooner. Right now, borrowers on these plans pay 10 percent of their income; under Trump, that jumps to 12.5 percent. But, under Trump's proposal, qualifying borrowers can have their loans forgiven after 15 years into repayment, whereas now borrowers have to wait 20 to 25 years. Surprisingly, this part of his plan would actually benefit parents in school because, even though you'd pay slightly more a month, you'd end up paying far less in the long run.

On the other hand, his plan to re-privatize federal loans would prove painful for low-income parents. In 2010, President Barack Obama signed legislation that removed private lenders and banks from the federal student loan program. That meant the federal government was the only entity responsible for doling out student loans. But Trump wants to revert the federal loan program back to pre-2010. His theory is that private lenders would compete for borrowers, therefore offering lower rates and better deals (sound familiar? look up "the Affordable Care Act"). Although privatizing loans would boost competition, it would actually make loans more expensive for students, as BuzzFeed pointed out. Interest rates would actually increase and eligibility requirements would become tighter. That, in the end, would squeeze out low-income students from pursuing college.

And What About Child Care?

Two weeks ago, Trump advisers had asked House Republicans to add provisions to this year's tax reform package that would ease the cost burden of child care, according to Politico. Under their proposal, parents earning less than $250,000 would be allowed to deduct child care expenses from their tax bills for children under 4 and elderly dependents; how much a parent could deduct would depend on the average cost of care for the state where they reside.

Trump has also proposed creating a dependent care savings account, similar to flexible spending accounts, that would allow working parents to set aside pre-tax dollars for child care costs, according to CNBC. But there's two catches: 1. these DCSAs would only be available through employers, and 2. You lose any unused cash you contributed at the end of the year. As for low-income parents, Trump proposed that the federal government "will match half of the first $1,000 deposited each year," CNBC reported. Translation: $500, which covers only about two weeks in a child care center in New York. There's also talk about expanding the Earned Income Tax Credit for low-income parents, but those details aren't solidified.

Although, on paper, these proposals seem like a step (albeit micro) in the right direction, they mostly serve the rich — in other words, as Belinda Luscombe wrote for Time, "those who make enough to need a tax break." A tax break won't help the parent attending school full-time who can't afford to put their kid in child care right then and there. A tax break is an after-the-fact benefit that doesn't actually cover the cost of the child care you couldn't afford in the first place.

Can He At Least Make College Cheaper?

When Trump unveiled his plan to make college more affordable during his campaign, he said that he planned to pressure universities with "multibillion dollar endowments" to shell out more on students, otherwise they'll lose their tax-exempt status, according to Inside Higher Ed. This may seem well-and-good, but as Inside Higher Ed pointed out, universities with large endowments are actually reporting losses in the 2015-2016 fiscal year. Even though those colleges, like Harvard University, still have billions in the bank, reporting losses could administrators an excuse to push back against Trump's plan. And that doesn't do much for parents who are studying in those schools.

While Trump and university administrators fight back over rising tuition rates, parents will still be stuck paying that bill. On the other hand, states like New York are offering more concrete solutions by exploring plans to make public institutions tuition-free for families earning less than $125,000 — the income bracket that bears most of the burden of tuition costs.