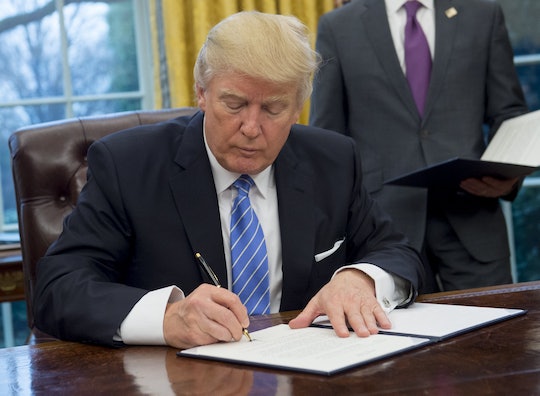 How Trump Will Affect Single Moms

Now that President Donald Trump has been sworn in, it seems like the one thing pretty much everyone can agree upon is that there will definitely be changes ahead. Whether they will be good or bad is up for debate, and ultimately, the answer likely won't be clear for quite some time. But based on what he's already said, it doesn't seem likely that the next four years will actually yield the prosperity that Trump promised during his campaign — at least when it comes to parents raising their kids alone. How will Trump affect single moms? Given that Trump's policy priorities don't seem to favor women or those who may be struggling financially, things aren't looking all that hopeful.

One big issue? Trump's tax plan. Although Trump has long praised his tax plan as being amazing, and one that would offer major tax cuts to Americans so they'd end up with more money in their own pockets, the reality isn't quite so fantastic. While it's true, according to Fortune, that the average household's tax bill would be lowered under Trump, the reality is that some taxpayers — including single parents — will likely end up paying more than they currently do.

One reason for that is because Trump's proposed tax plan would require that single parents would have to file as individuals instead of as the head of a household, according to Forbes, which would likely result in an increased tax rate. Trump also wants to eliminate personal and dependent exemptions and replace them with one standard deduction, which means that most parents' taxable incomes will increase — and the more children a family has, the more they will likely end up paying.

Then, there's the fact that Trump wants to reduce the overall number of tax brackets. He's argued that would improve the system, but in practice, what it will actually do is raise tax rates for some depending on their income. For example, as Fortune noted, a single parent with one dependent child earning an adjusted gross income between $53,050 and $68,550 would currently have a tax rate of about 15 percent. Under Trump, that same single parent would be looking at a 25 percent tax rate instead. And anyone in the lowest tax bracket, which is currently 10 percent, will be bumped up to 12 percent under Trump's plan as it currently stands, according to Politifact.

The exception though, perhaps entirely unsurprisingly, is that single parents who have extremely high incomes (think: more than $560,000) would save a lot of money thanks to Trump. That's because, while Trump's plan will raise the lowest tax bracket, it will actually lower the highest tax bracket for those making the most money (from about 40 percent to 33 percent, according to NPR). That honestly seems totally backwards — charging less for those who can afford to pay more, while charging more to those who can't — but Trump doesn't seem bothered by it. In fact, Politifact noted that, if Trump's tax plan stands, roughly 51 percent of single parents will see their taxes increase (so much for lower taxes for all, right?).

Unfortunately, that's not the only difficult reality for single mothers under Trump. During his campaign, Trump released a child care policy that proposed, among other things, six weeks of mandated maternity leave, as well as tax credits meant to off-set the high cost of child care, according to TIME. That's promising on the surface, especially since single mothers are more likely to live in poverty even when they work full-time, according to The Harvard Business Review. But it once again seemed that his plans would benefit those already well-off, while doing little to actually help those who really need it.

According to TIME, Trump's childcare plan primarily revolved around the idea that parents will be able to deduct their child care costs from their taxes, but plans like that are much more likely to assist wealthier people looking for write-offs than it is to actually make childcare more affordable for moms who are struggling. The plan would, however, continue to offer rebates to low-income Americans through the already-existing Earned Income Tax Credit (EITC), according to CNBC, which has been proven to actually be helpful. But overall, given the rest of the proposed changes to his tax plan, even Trump's child care deduction won't mean that most parents will be coming out ahead.

Perhaps the most frustrating part about this reality though, is that it was something that had already been discussed and analyzed before voters headed to the polls. In other words, Trump has never hid the fact that his tax plan wouldn't actually be good for most people, and yet, he was voted in anyway — by many who still insist that Trump's policies will benefit the average American, and that they will "make America great again," for the little guy. And while the majority of Trump's support base was made up of white males, according to The Independent, Trump did much better than expected among women too.

One of those Trump supporters, single-mom Angel Schultz, told The Washington Post on Inauguration Day that Trump's child care plan specifically appealed to her. Schultz said,

I hope he really focuses on the family. I think a lot would be the child care. It’s important to me to go to work and have life-work balance. That’s my problem right now. You go to get a 9-to-5 job and you work just to pay for daycare.

Similarly, Elizabeth Merchant, who has a 6-year-old son, told The Washington Post she voted for Trump so that her son could have a better life:

I hope [my son] has more opportunities. The past decade, it seems like opportunities for white males have decreased greatly. I hope that his opportunities in life can go back to when I was in high school.

Ultimately, of course, no one will really know for sure just how beneficial or detrimental Trump's policies will actually be until they've been put in place, and given Trump's penchant for unpredictability, it's also entirely possible that he could change his tax plan or child care plan, or just scrap it all together. Ideally, whatever he decides to do will end up actually helping Americans like he promised he would. But for now, it doesn't look like being a single mom in Trump's America is going to be particularly easy, and that's really frustrating.