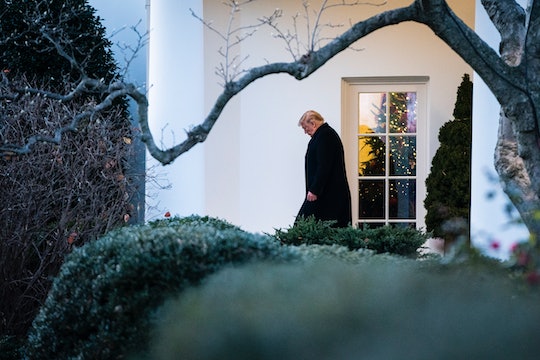 After being impeached by the House of Representatives earlier in the month, President Donald Trump escaped the political storm brewing in Washington, D.C. for a two-week holiday in slightly warmer temps. But how will Trump celebrate New Year's Eve? As he's done in years past, Trump is expected to ring in the new year from his private Mar-a-Lago resort in Palm Beach, Florida.

Trump arrived at Mar-a-Lago in Palm Beach on Friday, Dec. 20 for what was expected to be a two-week holiday, as CNN reported. That would place Trump's return to the White House sometime around Jan. 3 at the earliest, meaning he'll more than likely be celebrating this New Year's Eve as he has for more than a decade: hosting a lavish gala for Mar-a-Lago members and guests.

While the White House has not publicized Trump's plans for New Year's Eve, Mar-a-Lago is well-known for hosting an annual New Year's Eve party. According to The New York Times, Trump has rung in the New Year at Mar-a-Lago for "more than a decade." Last year, however, INSIDER reported that an unexpected break in tradition saw First Lady Melania Trump host the event alone after a government shutdown kept the president stuck in Washington.

But singing a verse of Auld Lang Syne with the First Family as the clock strikes midnight reportedly doesn't come cheap. Tickets for last year's Mar-a-Lago New Year's Eve Party were priced at $1,000 a person, according to HuffPost. It's unclear how much guests may have shelled out to attend this year's fête.

Amid his Dec. 31 celebrations, Trump is likely to spend, at least a moment, wishing his eldest son a happy birthday. Donald Trump Jr. has in past years been presented with a birthday cake during Mar-a-Lago's annual New Year's Eve bash, according to INSIDER.

Although 2019 has seen Trump return to his family's long-held tradition of celebrating the holidays at his Florida resort, it doesn't appear the president is taking a complete break from work. Along with keeping up a regular stream of tweets attacking Speaker of the United States House Nancy Pelosi, CNN reported that Trump has also been seeking advice from White House aides about what his impeachment defense strategy should be if and when the Senate convenes its impeachment trial.

"White House officials have been coming and going from Trump's Palm Beach retreat," CNN reported Saturday. "Presidential senior adviser and son-in-law Jared Kushner arrived Thursday, a person familiar said. Now that Kushner has joined the President, sources say, the holiday is likely to become more of a working trip than the relatively unstructured time Trump has spent at Mar-a-Lago so far."

With a Senate trial likely awaiting him in 2020, there may be no one more anxious about the impending new year than the president. It's unclear, however, if Trump's impeachment will put a damper on the New Year's Eve party he and the first lady are expected to host this year.