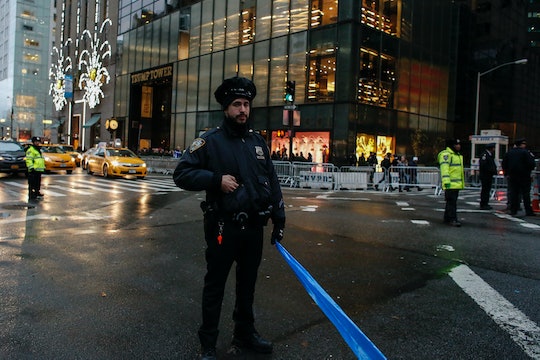 One could say that New York is a pretty busy place — and when one cog in its machine breaks down, the whole thing feels the effects of it. At least, that's the experience New Yorkers had on Tuesday, when Manhattan's Trump Tower was evacuated over an abandoned bag of toys left inside the Fifth Avenue landmark. The incident raised questions for those living and working within the packed island: Exactly how will Trump Tower security affect New Yorkers over the next four years?

Judging by Tuesday's incident, it turns out it could have quite the effect on daily life in Manhattan. New York is a place where security is taken seriously: it's the second largest city in North America and one of the busiest hubs of North America, and now, it's also the home of the president-elect, one of the most highly protected people in the country. So when a stray backpack was found near Niketown — a store in the Trump Tower — on Tuesday, security guards didn't simply hold it behind the store's desk in case someone came by to pick up the forgotten item. Instead, they prompted the quick evacuation of the Trump Tower, with people streaming for exits, directed by cops.

The Trump Tower on Fifth Avenue has a lobby that, by law, must remain open to visitors for over 12 hours a day, and it's home to stores, restaurants, and private residences aside from President-elect Donald Trump's. According to the Associated Press, police in New York City already respond to 42 calls a day related to suspicious packages. In a place that holds the president's home (and houses his wife and child), yet must remain open to the public, how many calls will police receive about suspicious packages or people?

According to The New York Times, the Trump Tower was closed for only about an hour — but the incident blocked traffic for miles, sent city buses down alternate routes, and blocked pedestrian access to the area. Stores in the near vicinity had to close, and the entire block was evacuated. People quickly took to Twitter to make jokes about the irony of a forgotten bag of children's toys causing the hubbub that it did, but Tuesday's incident serves as a stark warning of what's to come for Manhattan, now that it's home to the president-elect. (The Trump transition team did not immediately respond to a request for comment on the security procedures or whether they will be updated or re-evaluated following this incident.)

Traffic hasn't been the only thing affected in New York City, either. Businesses have complained that the stream of tourists visiting the president-elect's home, coupled with the many new layers of security shielding the area, have blocked customers from accessing their businesses. On Twitter, Momofuku owner David Chang said security checkpoints were "killing restaurant foot traffic."

Mayor Bill de Blasio has repeatedly asked the federal government to foot the immense bill — approximately $1 million a day, according to CNN — that comes from protecting the president-elect, a burden currently borne by the city. After the false alarm on Tuesday, Trump's press secretary, Sean Spicer, tweeted a "thank you" to the NYPD. De Blasio's aide, Eric Phillips, swiftly responded, "No problem. We'll send you the bill."

Thankfully, the incident on Tuesday was simply a false alarm. While the next four years may cost New York some time, money, and traffic annoyances, let's hope no real danger comes to the New Yorkers housing the president-elect.