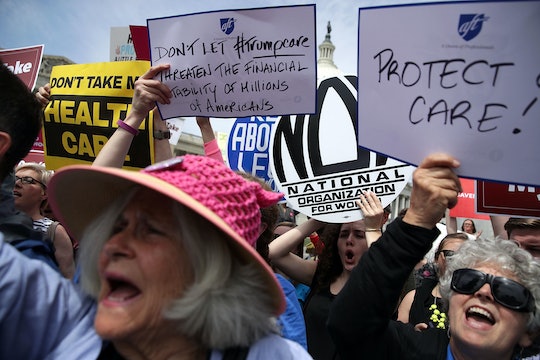 How The AHCA Could Affect Parents Who Adopt

When Americans think of pre-existing conditions that could exclude them from affordable health care, they generally think of Grey's Anatomy-style health issues like neurological disorders, cancer, or tumors. But as it turns out — unfortunately for adoptive parents — having an "adoption in process" counts as a pre-existing condition to some insurers. In pre-Obamacare days, that meant families who were on their way to adopting a kid could be denied health insurance, but what will that mean if the American Health Care Act passes? How would Trumpcare affect adoptions and adopted kids?

The new, revised version of the American Health Care Act — also frequently known as Trumpcare — passed in the House of Representatives on Thursday, and it will be voted on in the Senate next. The part of the revised AHCA bill that has drawn the most criticism, it seems, is that it would reverse Obamacare laws that prohibited insurers from charging Americans with pre-existing conditions higher premiums. Insurers wouldn't be able to deny Americans coverage due to pre-existing conditions, but people could easily be priced out of insurance thanks to increased rates.

As Kentucky Gov. Matt Bevin shared in 2014, one of those pre-existing conditions for insurers is being involved in the process of adoption: before Obamacare was instated, Bevin and his wife were denied insurance for more than a year until that process was complete.

Under the American Health Care Act, Americans could easily go back to being priced out of insurance or charged extra premiums due to their decision to start the process of adopting a child, leaving the adoptive parents (and any children they may already have) uninsured for the entirety of the time that they're involved in the adoption process — or costing them more than they can afford.

Once the adoption process is complete, things become a little more complicated. Thanks to the Omnibus Budget Reconciliation Act of 1993, employer-sponsored plans must give adopted children the same coverage as parents' biological children, without any premiums for pre-existing conditions and without any requirements that the adoption be legally finalized in court first. According to Adoptive Families, however, the same rule did not always apply to those on individual plans, since those were were not regulated by federal law.

Under Obamacare, however, adopting a child qualified parents for a special enrollment period, outside of open enrollment, that would allow parents to add an adopted child to their plan or to switch to a new plan. Obamacare also barred insurers from refusing coverage or raising premiums due to children's pre-existing conditions, so families under all plans were protected.

If Trumpcare passes the Senate, parents may have to go back to choosing between starting the adoption process or having affordable health insurance for the rest of their family. And after their child is adopted, there may be no guarantee that adopted kids will be able to immediately be added to plans, or that their pre-existing conditions won't drive premiums up for their parents' plans.