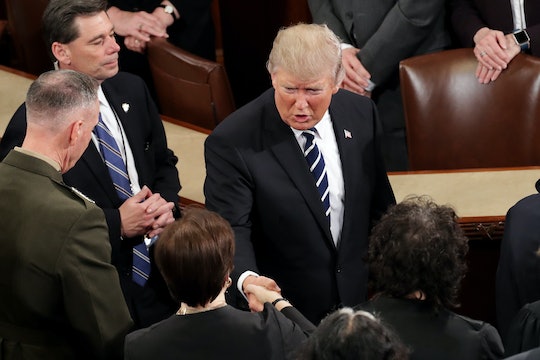 The controversial executive order President Donald Trump signed in January meant to restrict the entry of refugees and immigrants from a number of Muslim-majority countries caused a huge backlash, and was ultimately blocked by a federal judge. The White House said it has since revamped the order, but how will Trump's new immigration order be different? Experts anticipate that the changes will focus on making the order harder to argue in court. But it might still be a while until he confirms exactly what his plan entails. According to CNN, although the order was expected to be released Wednesday, the White House has decided to delay his reworked plan following positive reviews of his first-ever speech to Congress Tuesday night.

Trump's highly-anticipated speech was a very important moment for the president, and many are now applauding the address as "well-delivered" and "presidential," according to The Guardian. While Trump did take a more reserved tone, eschewing his usual hardline, divisive political rhetoric for a more optimistic and traditional speech promising growth, prosperity and unity among Americans, it seems that the bulk of the positive feedback stemmed primarily from the fact that he managed to stick to the script, refraining from his signature ad-libbed, off-the-cuff style. Critics noted that Trump's speech was still peppered with inaccurate statistics and facts though, and that, really, his policies and opinions remain pretty much exactly the same as before. And while Trump may be holding off on delivering his new immigration order to bask in the unusually warm afterglow of his big speech, it seems likely that the order itself will remain just as controversial as the original.

While Trump promised to deliver a new executive order in response to the temporary suspension of his original plan (which temporarily barred travelers from Iran, Iraq, Libya, Somalia, Sudan, Syria and Yemen from entering the United States), the biggest changes will likely affect its legality, not its content. According to Reuters, Trump's original January-issued order resulted in "more than two dozen lawsuits" filed in U.S. courts, and was ultimately blocked after the state of Washington claimed that the ban unfairly affected Washington green card holders, particularly university faculty who would then be blocked from traveling for research purposes. Since citizens and permanent residents are afforded protection under the Constitution, it's likely that Trump's updated order will exclude green card holders from the travel ban, making it harder for opponents to argue against it.

Other changes are expected as well, however. According to TIME, the order is still expected to ban citizens from six of the original seven Muslim-majority countries from entering the United States (Iran, Libya, Somalia, Sudan, Syria and Yemen), but unnamed White House officials have indicated that the ban on Iraq will be lifted following the Pentagon and State Department's argument that the country plays an important role in the fight against ISIS. In addition, the indefinite ban on Syrian refugees is now expected to change: in the new order, they will likely be included in the general 120-day ban instead of in a separate category.

The exact changes to the immigration order are still to be seen, but few are expecting the new plan to be a crowd-pleaser. One often-cited reason is that, while Trump has repeatedly explained that his travel ban is an important security measure meant to keep the country safe from terrorism, the seven countries named in the ban haven't actually been proven to present a specific risk to national security.

According to The New York Times, a three-page internal report from the Department of Homeland Security following the ban stated that “country of citizenship is unlikely to be a reliable indicator of potential terrorist activity,” and that the number of people from those countries who have been linked to terrorist activity in the United States since 2011 is actually very small. Furthermore, very few citizens of those countries are even granted visas by the State Department anyway, due to tight restrictions already in existence on immigration.

Given the White House's decision to delay the announcement of the new executive order, it seems pretty safe to assume it considers Trump's Congress speech to have been a big success. But not everyone is on board with the so-called "New Trump." The president was skewered on Twitter late Tuesday and into Wednesday for earning praise for his address, when many of his facts were still wrong, and when the speech itself was considered by many to be an example of political pandering.

According to The Guardian, Trump made inaccurate claims about everything from the number of Americans currently out of the labor force, to the loss of manufacturing jobs after NAFTA, as well as the rate at which corporations in the United States are taxed. And despite claiming in his speech that he would "create massive tax relief for the middle class," his tax plan is actually predicted to overwhelmingly benefit the wealthy — about half of Trump’s tax cuts would likely go to the top 1 percent of earners — while potentially adding as much as add $5.3 trillion to the national debt.

Of course, Trump's uplifting and much more optimistic view of the country's future is at the very least an improvement over what we normally hear from the president, and if he does intend to follow through on what he is promising, there could be good reason to be hopeful. But for now, all he seemed to prove Tuesday night is that he is capable of reading from a script and reigning in his usually-offensive commentary. If Trump truly wants to unify the country and protect its citizens, he might want to double check his new immigration order, and make sure it's actually fair.