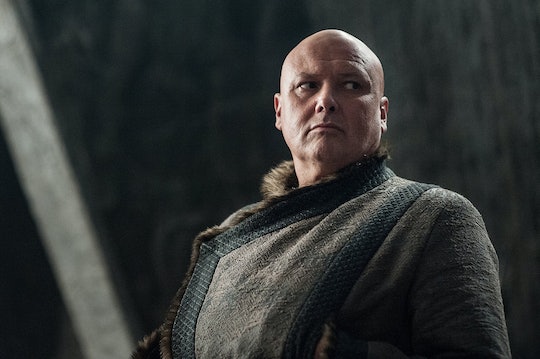 This Theory About Varys' 'Game Of Thrones' Fate Is Chilling

By far the densest scene in Game of Thrones Season 7, Episode 3 was an exchange between Varys and Melisandre while standing on the cliffs of Dragonstone, overlooking Jon Snow's single ship. It was super cryptic, and thus, jam-packed with clues about where the series might be going in the next four episodes. Varys advised Melisandre to get out of Westeros, which she planned to do, but she also let it slip that she must to return to die in Westeros, just like Varys will. So how will Varys die on Game of Thrones? Unsurprisingly, it appears that the show is taking us in a very different direction than the books.

In the books, Varys is not an adviser to Queen Daenerys at all, but rather grooming Aegon Targaryen (the son of late Prince Rhaegar), who is implied to be an imposter. At the end of A Dance With Dragons, the fifth and most recent book in the series, Aegon lands in Westeros. Some readers theorize that he'll gain a temporary grasp on the Iron Throne, Dany will arrive at King's Landing to discover an imposter Targaryen has taken the crown, and then she'll either have her dragons set fire to the Red Keep or find another way to set off the wildfire stores underground and slay fake Aegon — and likely his adviser Varys by his side.

Needless to say, Aegon is not a character on the TV show, and Varys has a whole different narrative arc. So we're kind of shooting in the dark when it comes to theorizing a potential end for Varys. What we do know a little bit about is the night Varys was castrated, which may hold potential clues as to how he dies. He said back in Season 3 that a sorcerer castrated him as part of a spell and threw his, uh, bits into the flames. As the sorcerer spoke to the fire, Varys heard a voice talking back. And from that moment on, he told Tyrion, he always hated magic and those who practiced it. (Hence his chilly exchange with Melisandre.)

Then, last season, viewers heard the other Red Priestess Kinvara tell Lord Varys that she knew who the voice in the flames was and what it said. Vanity Fair speculates that Melisandre may therefore also know what the voice in the flames said, and that it prophesied Varys' death. Is it possible Lord Varys learned how he would die that night as a child? It would explain why he's so shaken every time someone brings it up and why he hates magic. As for how it'll happen, we have nothing go on from the books. It could be White Walkers, it could be that Varys betrays Daenerys and ends up dragon-crisped, it could be that Dragonstone is stormed by the Lannister army and Varys goes down in the fray. We'll just have to stay tuned to find out what's in store for him.