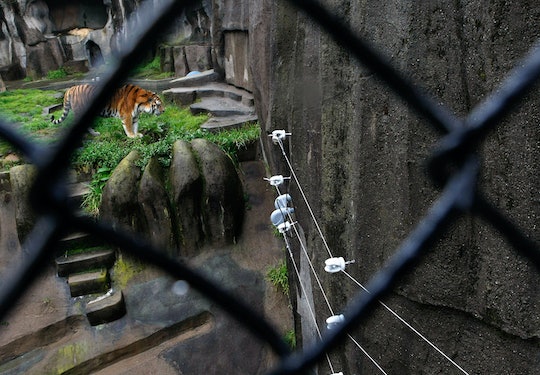 How Will Zoos Protect Children From Animals After The Cincinnati Zoo Incident?

Last week's incident involving a 3-year-old who crawled into the Cincinnati Zoo enclosure, leading to the sad death of Harambe, a 17-year-old silverback gorilla, has brought attention to the issue of zoo safety. So how will zoos protect children from animals following the Cincinnati zoo accident? Visitors might have to start having to look through a lot more fencing to get a glimpse of their favorite animals.

More Like This
Apple Card Family: How It Works & What Your Kids Can Learn
Attorneys General In Nearly Every State Oppose Facebook’s “Instagram For Kids” Plan
9 Signs Your Child Is Overheated
Vaccinated People Can Ditch Masks. Where Does That Leave Kids?

It's a tricky line for zoos to walk. On one hand, zoo officials want to keep both animals and visitors safe. On the other, the fun of going to the zoo is getting an up-close look at wild animals. CNN reported that it's the golden rule of zoo safety: "Keeping animals in, and people out."

But George Houthoff, CEO and co-owner of Houthoff Zoo design told CNN that although there have been plenty of advances in making zoos safer, there's still work to be done. "Zoos have developed from concrete boxes, with steel bars to natural looking habitat immersion environments," he said. "...worldwide there are still a lot of exhibits in zoos that are potentially dangerous for children."

That's a lesson the Cincinnati Zoo learned last Thursday when a 3-year-old was able to climb over a barricade and fell 15 feet into the gorilla habitat. And although the zoo wasn't found to be negligent, officials will re-open the gorilla exhibit next Tuesday with a beefed up barricade for added safety. Here's a look at the new fence:

As a result of the Cincinnati Zoo accident, zoos across the country are using the incident to re-valuate their own safety measures. The Kansas City Star reported that the Kansas City Zoo is just one of the nation's facilities taking the opportunity to reassess it's security and barriers, in order to ensure that its grounds are safe for the nearly 1 million zoo patrons it welcomes each year.

"We feel we have the animals contained and the people contained where they both should be," Kansas City Zoo Director Randy Wisthoff told The Star. But, he added, "people do some really weird things sometimes."

And as any mother can attest, 3-year-olds are among the most unpredictable people around and really do all sorts of weird things. They climb and explore and get into situations that can be utterly mind boggling, which is why so many fellow moms were so quick to defend the mother of the boy who fell into the Cincinnati Zoo enclosure. No matter how toddler-proof your life is, those little buggers will inevitably discover your defenses' weakness. This is a stark reminder zoos are no exception.

Zoos are constantly evolving in an effort to better serve animals and people, and although accidents like the one last weekend which ended in the tragic death of a beautiful animal are heartbreaking, they are also pretty rare. According to a report from National Geographic, there have been 42 incidents where animals died in a zoo escape or attack at zoos which are accredited members of the Association of Zoos and Aquariums. And including the Cincinnati zoo accident, there have been 15 zoo incidents in which people were killed and 110 in which people were injured since 1990. The report adds, there hasn't been a primate involved in a deadly zoo incident over the past 26 years.

While the entire event was tragic, at least zoos are learning from it and doing something.