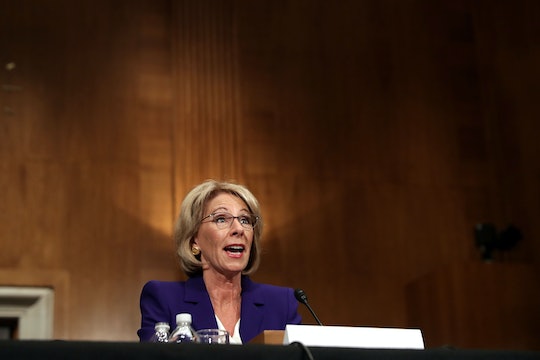 How Would Betsy DeVos Change Kindergarten?

During her confirmation hearing, Betsy Devos — Secretary of Education under President Donald Trump — struggled to answer a number of pertinent questions about the past, present, and future of the U.S. education system. DeVos has been a controversial pick since she was tapped by Trump for the role, in large part because of her lack of experience. Parents and teachers are particularly worried about DeVos' opinions (and often lack thereof) on early childhood education. How would Betsy DeVos change kindergarten? Her stance on early childhood education is still unclear.

From the moment she was picked by Trump as the nominee for Secretary of Education, politicians and the public alike expressed concerns about DeVos' lack of experience with the U.S. education system — and not just from a policy standpoint. Neither DeVos, nor her children, attended public school, according to The Washington Post. DeVos has also been a long time advocate of school choice, which allows parents to use government vouchers to help cover the cost of sending their child to private or charter schools instead of public schools, according to NPR. DeVos' focus on school choice programs — rather than addressing the broader needs of the public school system — have concerned many educators, parents, and politicians.

In the U.S., public early childhood education programs — like Head Start — are government-funded. Though state to state, there is a disparity in funding (and therefore access) that has impacted the ability of programs to reach families, according to a 2016 report by the National Institute for Early Education Research. The Head Start program is specifically geared toward serving low-income families with children who are not yet old enough for preschool and kindergarten programs. According to the report by the NIEER, as many as 75 percent of children eligible for Head Start programs may not be able to access them because of insufficient funding.

During her confirmation hearing, DeVos was asked several times about the state of early childhood education programs in the U.S. — including Head Start — but did not demonstrate a keen understanding of them or offer any immediate thoughts on possible solutions to the funding issues they're plagued by. In the U.S., each state has requirements about the age at which a child should start school. Assessing readiness for kindergarten is often based at least in part by whether the child was able to attend Head Start and preschool programs, according to the National Center for Education Statistics.

Even if she hasn't revealed any specific plans, the way DeVos approaches The Office of Early Learning, an office within the U.S. Department of Education, may be an indicator of what's to come. Decisions made regarding budget and policies may provide some clues as to DeVos' intentions for early childhood education, which many will recall was a focus of the previous administration. Under President Obama, Head Start programs got new performance standards, the Child Care and Development Block Grant was reauthorized and several Preschool development grants were added, and the Every Student Succeeds Act was signed.

Last week DeVos was interviewed by WFTV 9, Florida's local ABC affiliate, and mentioned that in addition to continuing to promote school choice through voucher programs, she believes that standardized testing in schools is "part of the equation," each state should be allowed to "decide how frequently the testing is actually done" — which she said would be reflected by the Every Student Succeeds Act — which was set to go into effect for the 2017-2018 school year — under her watch.