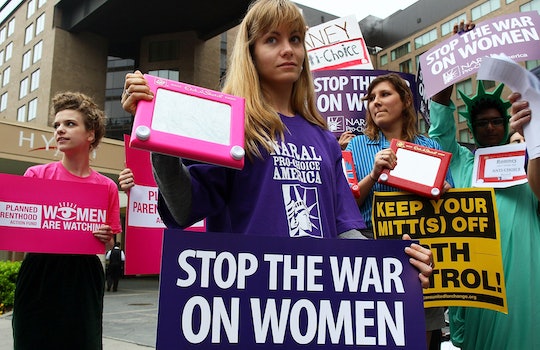 On Jan. 17, Republicans introduced a dangerous new bill in Congress: H.R. 586, also known as "The Sanctity of Human Life Act." The personhood bill aims to define human life as beginning at conception, and wants Congress to guarantee fertilized eggs' "right to life" as soon as conception happens — which would, of course, make all instances of abortion illegal. It's also important to note that H.R. 586 doesn't note any exceptions to the rule for instances of rape, incest, or to protect the life of the mother. And, it gives a a fertilized egg the same rights as a human even before implantation (which is when a woman is medically deemed pregnant), completely outlawing abortion. That means the personhood bill would affect sexual assault victims, likely forcing them to carry their attacker's baby to term.

The bill was introduced by Georgia Rep. Jody Hice earlier this month, and he has 23 cosponsors backing him up. A page on Hice's website explains his reasoning for opposing abortion and reads:

In the almost five decades that have passed since the Roe v. Wade decision, we have lost the lives of over 50 million unborn Americans. ... Modern medical science has provided us with tools like 3D high definition sonogram imaging of the baby in the womb, clear evidence of intelligent human life. ... [Hice's] bill defines life as beginning at conception without exception. If enacted, it would end the plight of abortion on our nation.

While the Sanctity of Human Life Act wouldn't outlaw abortion itself, it would give politicians fire with which to wage their anti-abortion fights — and if the government classified all life as beginning at conception, all abortions could be outlawed. Current exceptions to laws limiting abortions (such as in the cases of rape, incest, and danger to the mother's life) could be removed. Sexual assault victims could be forced to carry to term.

It's a situation that has already played out in other countries. It would put women at risk of pursuing unsafe, illegal abortions, risking women's lives over politicians' scientifically unfounded religious beliefs. And it affects the children born from sexual assault, as well. According to Time, children born of sexual assault are often considered lost generations, "subject to lives of stigma, isolation, and even out and out abandonment." Fetuses exposed to high levels of maternal stress during pregnancy have also been shown to have affected brain development. Children born of assault also frequently face poor parent-child relationships, discrimination, stigma, and identity issues.

A study conducted in 1996 estimated that 32,101 pregnancies are the result of sexual assault in the United States every year. 50 percent of those pregnancies ended in abortion, another 6 percent of them ended in adoption, and nearly 12 percent of the pregnant women had a spontaneous abortion. Less than one-third of the assaulted women chose to carry to term and keep the child.

If H.R. 586 concerns you, speak up now: write to your representatives and let them know the importance of preserving women's right to choose. Not only because women's reproductive rights are protected by law in the United States, but because no sexual assault survivors should ever be forced to carry with a pregnancy that was forced upon them in a violent crime.