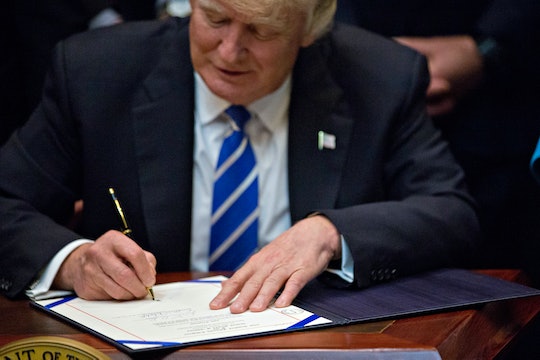 Fulfilling a campaign promise made long ago, President Donald Trump is expected to sign a new draft of his religious liberty executive order on Thursday. Families on both sides of the aisle are anxious about the measure, but one group in particular stands to suffer the greatest impact. So how would Trump's religious liberty order affect LGBTQ parents?

For the moment, it seems discrimination against LGBTQ families based on religious beliefs would be more or less accepted. Romper has reached out to Trump's administration for comment but has not heard back at this time.

Though the exact text of the order is not yet known, an early draft was leaked in February by The Nation. After the February leak, Vice President Mike Pence reportedly began reworking the order, given all of the criticism that the original draft attracted. Pence passed similar legislation while serving as governor of Indiana — a move that ultimately cost the state a significant amount of money, reflecting poorly on Pence.

In its first version, the order assured that "any organization, including closely held for-profit corporations,” were allowed to exercise their personal religious views "when providing social services, education, or healthcare; earning a living, seeking a job, or employing others; receiving government grants or contracts; or otherwise participating in the marketplace, the public square, or interfacing with Federal, State or local governments." Thus, all "religious or moral objections to same-sex marriage, premarital sex, abortion, and trans identity," noted journalist Sarah Posner, would be legal justifications for organizations to refuse all sorts of service.

So, though there is no definitive take yet on what exactly Trump will sign into action on Thursday, the general gist that organizations will be allowed to discriminate based on religious beliefs is undoubtedly alarming. Under Trump's executive order, organizations could refuse to serve LGBTQ families, withholding any goods and services that they see fit. Thus, LGBTQ parents seeking social services, looking to get the best available educational opportunities for their children, and applying to jobs in order to provide their families could then be legally denied these opportunities due to their sexual orientation and/or gender identity. If the aforementioned educational organizations or employers insist that it is within their religious beliefs to deny association with LGBTQ applicants, then the new executive order would likely allow it.

Equally as troubling as this so-called "right to discriminate" is the message that it sends to LGBTQ families, insisting that their needs are not held to the same standards as straight families' are in the eyes of the federal government. In siding with conservative legislators, Trump will be making it known that his priorities lie with the interests of religiously informed businesses rather than the rights of marginalized parties.