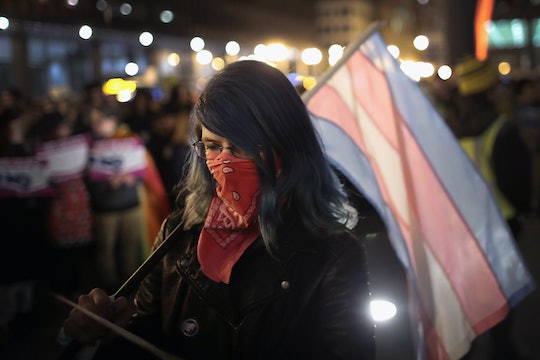 For President Donald Trump and his administration, nothing says "National Day of Prayer" quite like stripping broad swaths of Americans of basic rights and protections. At least, that's the impression one might get from the president's reported plan to sign a "religious freedom" executive order on Thursday, an occasion meant to unite the nation. It's no secret that, in the United States right now, terms like "religious freedom" and "religious liberty" used in a political sense are basically synonymous with pursuing a license to discriminate against LGBTQ individuals. We also know that Trump's religious liberty order would affect transgender kids perhaps particularly harshly.

A unnamed senior administration official told CNN Wednesday that it's "definitely possible" that the president will take pen to paper to communicate to a huge and diverse population how little they matter to him. And if the draft of the order that was leaked to The Nation in February is any indication, it's clear that it would prioritize "any organization, including closely held for-profit corporations" over actual citizens' best interests.

The actual text of this looming order has not yet been made public, but its February iteration would have implemented exemptions for people and organizations with religious objections to same-sex marriage, premarital sex, abortion, and, of course, the trans identity.

As egregious as all this is, it's not exactly coming out of left field. One of Trump's early orders of business was to reverse the guidelines established by his predecessor, President Barack Obama, that instructed public schools to allow trans kids to use the bathroom that corresponds with their gender identity, not their biological sex. Obama issued the original guidelines in response to the recent rash of legislation preventing students and others from simply using the facilities they were comfortable using in pubic.

And the "religious liberty" aspect of the likely-upcoming executive order closely mirrors the Religious Freedom Restoration Act that Vice President Mike Pence signed into law as governor of Indiana in 2015. He ultimately amended the bill to prevent it from being used to discriminate against LBGTQ people amid rabid backlash, but his intentions had been firmly established.

And, really, the language that the February version of the executive order (which Trump never signed), tells you all you need to know about how seriously the Trump admin take trans rights. Here's what it said about the definition of gender:

... Male and female and their equivalents refer to an individual’s immutable biological sex as objectively determined by anatomy, physiology, or genetics at or before birth....

Talk about totally disregarding someone's identity. And similar to the famous example that the original version of Pence's Religious Freedom Restoration Act would have entitled — a wedding cake baker and their ability to refuse to concoct a confection for a same-sex wedding — the religious liberty order could have consequences for trans youth.

Speaking with Mic, Gay, Lesbian and Straight Education Network executive director Eliza Byard provided a harrowing example. If Trump signs the order as expected, a school counselor could theoretically cite a sincerely held religious belief in refusing to work with a trans student (or a gay, lesbian, or bisexual one as well). This, she said, tells trans youth that so-called religious liberty is more important than "their right to survive and to thrive."

Suicide rates among trans people are already astronomically high; Imagine what codifying hate against them on the federal level could do to their state of mind, in addition to their physical wellbeing and overall quality of life.

And this order would have the potential to touch many aspects of trans' kids lives, from their education to their health care to, one day, their employment prospects and job security. That's a huge burden to bear at a young age, as the federal government hashes out whether you're worthy of basic human protections that should already be afforded to all.