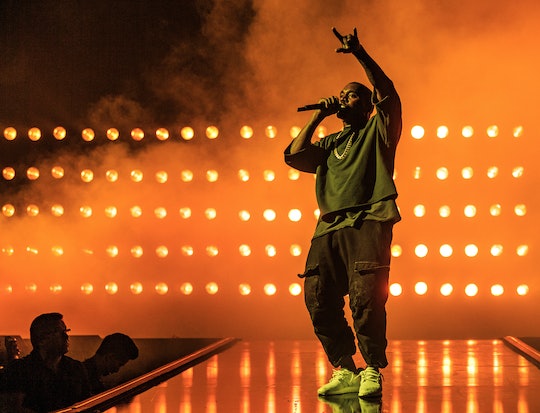 How You Can Get Kanye's New Song Every Friday

It's been more than two years since the release of Kanye West's last album Yeezus, over a year since he teased the first track of his upcoming album, Swish, and just a few days since he shared another song, Facts, from the same upcoming album. If you're a Kanye fan in 2016, this countdown to the album release seems very long, but there's some good news. Earlier today wife Kim Kardashian-West sent out a tweet that revealed Kanye will start releasing new music every Friday beginning this week, just like he did during his weekly GOOD Fridays in late 2010, when he released a song every weekend until Christmas. But, how can you get Kanye's new song every Friday? Unlike Kanye's music-releasing techniques, getting every song will be super simple.

All of Kanye's Friday songs will be released on SoundCloud. Just a few hours after Kim sent out her Tweet, Kanye added a new track to his SoundCloud titled "Real Friends & No More Parties in LA." Although Kanye deleted the song shortly after, saying on Twitter that "There was a slight distortion in the main loop within Real Friends," the song was back up on his account Friday afternoon. So there you have it, every Friday, starting today, is a Kanye new music day.

And while fans are checking out his new song, it might be worth following Kim Kardashian's Twitter account as well. She's been playing a major role in announcing her husband's new song releases. On New Year's Eve, Kim sent multiple tweets warning Twitter that West's song "Facts" was about to drop. The song was released just hours later on SoundCloud.

As for when the entire album will be ready to drop, Kanye said on Twitter that he's still working on it. Hey, at least fans have a weekly dose of Kanye to look forward to.