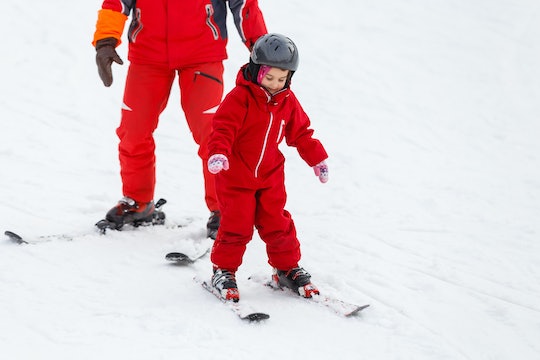 The Age When Kids Can Start Skiing May Shock You

If your kids are inspired by watching the 2018 Winter Olympics in PyeongChang, then it's only a matter of time before they want to try out some of those cool sports in real life. For instance, the pros make it look so easy and fun to ski down the slopes. But how young can kids learn to ski, and what should you know before hitting the bunny slopes with your little one? Even the most skilled skiers were little beginners at one time, too.

As with most anything kid-related, when your little one can start skiing depends on a variety of factors. It isn't like a kid turns a certain age and is automatically ready to hit the slopes. "Children can start to ski a little at two, if they are confident, co-ordinated and relatively fearless," John Yates-Smith, founder of YSE ski resort, told Welove2ski. It depends on the kid, but if your child is eager to jump on a pair of skis at age 2 or 3, then some brief, easy excursions with a private instructor might be perfect. At this stage, helping your kid get accustomed to the ski boots, and making sure the whole experience is fun, is the main idea.

Ski schools are another matter entirely. If you want to enroll your kid in a ski school as soon as possible, you'll have to check out your school's individual age requirements. In general, though, ski resorts offer ski programs for kids aged 3 to 4, as explained in Ski. But don't expect your preschooler to go roaring down a black diamond slope immediately. A lot of those early lessons are all about fun. "Technique is not a big piece of those first few days,” said Professional Ski Instructors of America National Alpine Team member Heidi Ettlinger in Ski. “Sometimes the little folks love nothing more than taking a break and having snow play time.” Ski instructors who work with little kids often will have a good sense of when it's time to let the kiddos take a snowball break.

In some cases, though, it seems like the third year is an ideal time for kids to start skiing. "I started skiing when I was three years old," said three-time Olympic skier Nancy Greene on her website. "My parents were founding members of the Red Mountain Ski Club in Rossland, BC where I grew up and so they got all us kids skiing very early. I think three is a good time to start — at least it worked for me and for our sons." Who knows? Maybe your toddler's first forays onto the slopes will inspire an Olympic career.

Not every preschooler is ready to get into skiing, however, and it's important to refrain from making those early lessons too hard or overwhelming. Also, it's crucial to address the fact that soaring down an incline on skis is at least a little scary at first. "If your child says they’re afraid, your only response should be to ask them to tell you about their fear and to ask them what it feels like,” said extreme skier Kristen Ulmer in The Telegraph. “Resist the urge to tell them there’s nothing to be afraid of. Not only is that not true, but you are shaming them for having fear.” Like so many parenting quandaries, you're helping your child strike a balance between independence and caution, and it's a slippery slope to navigate.

If your toddler doesn't start skiing until a little later in life, that's perfectly OK, too. There's still plenty of time to develop a lifelong love — or aversion — of the slopes.