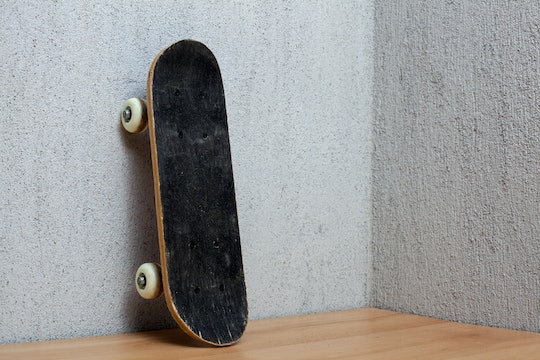 I love being a part of an active family. It is one of life's great joys to go out to the park and chase my kids as they scooter about or ride their bicycles. Activity is an integral part of my kids' lives, and we're always looking for ways to have more fun outside. For my family, scootering and skateboarding has always been a go-to activity, and I never thought much of it beyond making sure they had proper safety gear. But when are these activities deemed age appropriate? When can toddlers skateboard? I mean, if a dog can look cute doing it, just imagine how cute your 2-year-old would look on a halfpipe.

This is one of those instances where sports enthusiasts and the medical establishment tend to butt heads like a pair of angry mountain goats. Team skateboard will tell you that kids as young as 2 years old can start skateboarding with the right gear, and that the company Ookie even manufactures starter scooters that employ a side handle to help them out. However, due to the tens of thousands of injuries from scooters and skateboards each year, the American Academy of Pediatrics (AAP) takes a much more cautionary approach, advising that toddlers should never be on a skateboard. Instead, they wrote that kids can begin skateboarding at age 5 with close supervision, but shouldn't be allowed to do it alone until age 10.

This seems extreme, but when you examine their data, it's a wonder they're not as strong in their wording about skateboards as they are about backyard trampolines. The AAP found that "with increasing popularity of the sport, the number of injured individuals younger than 20 years has increased from an estimated 24,000 in 1994 to approximately 51,000 in 1999. In 1997, 1,500 children required hospitalization for an injury sustained while skateboarding, and in most cases, the injury was to the head." Yes, the data needs to be updated, however, according to Statista, the numbers of skaters has declined since its peak in 2006, and is now hovering around the same numbers as it was in 1997. Although it should be noted that all of those skaters from 2007 are probably parents of toddlers now.

So it's not about how young can toddlers skateboard at all. Experts believe they just can't or shouldn't. But what about skateboard-like activities like scootering or riding a two-wheeled ripstick?

As far as the ever-popular scooters go, the AAP recommends no one under 8 use them without close parental supervision. They also caution that all safety measures be taken. That includes a helmet, elbow pads, wrist guards, and knee pads every time you take your kids out to scooter. As far as the ripstick, there's nothing concrete in the literature, but having had personal experience with one, I will tell you they're harder to operate than a standard skateboard. Beyond the safety of them, they require significant strength to power, so it would most likely just end up as a very wobbly and expensive step more than anything.

In the end, you're the parent and the judgement is on you. However, having seen some pretty gnarly concussions and injuries from skateboards at the skate parks where I've spent time rollerblading, I will advise you that every bit of safety is warranted. It's surprising how fast you can get going, and how fast you can fly off of them. Use your best judgment and be sure that your child is outfitted in all of the necessary skate gear. (Don't forget the tiny Vans to really make it worthwhile.)