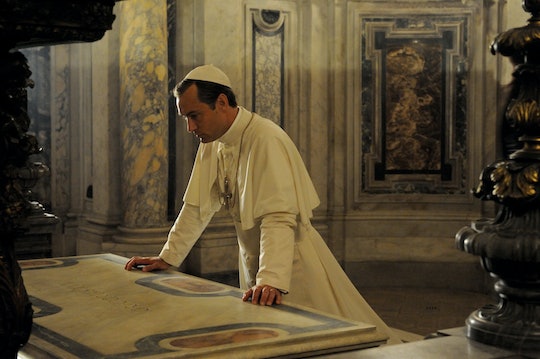 In The Young Pope, Jude Law stars as Pope Pius XIII: born Lenny Belardo in New York, he went on to rise to the highest echelons of the Catholic Church. And just in case you were afraid this show would be boring, rest assured – he's also super edgy! He's handsome! He breaks rules! He drinks Cherry Coke Zero for breakfast and chain smokes. He's got all the snide selfishness of a 15-year-old but he is not, in fact, 15. He's not even the youngest pope in history, but his relative youth still means that he's a rogue loose cannon who won't subscribe to all those centuries-old rules. Or will he? A title like The Young Pope raises a lot of questions, chief among them: how young is The Young Pope, exactly?

It looks like Pope Pius XIII is around the same age as the actor who plays him. According to one review, a throwaway line reveals that he is 46, just two years older than 44-year-old Jude Law. Pius XIII may be the youngest pope in a very long time, but as a man in his mid-to-late forties, he's not the youngest to ever hold the position. There have been plenty of young popes in power over the years, but the youngest took control in the early days of the church; as centuries passed, it became an older man's job.

He's also not what one might expect from a younger pope; he's not liberal, open-minded, or forward-thinking. Executive producer Lorenzo Mieli describes him as "a contradiction. He's young outside but old inside." That means that despite the cigs and sunglasses, he's actually incredibly outdated in his outlook. I think there's supposed to be some kind of irony there.

In one clip from the upcoming series, Pius XIII proclaims, "Tolerance doesn't live here anymore. It's been evicted." He may be causing trouble for the Vatican and following his own path, but that path is super conservative. After his surprising rise to power, Pius XIII attempts to institute all kinds of restrictive rules and extreme ideas that harken back to days gone by more than they look towards days to come.

It doesn't sound as though Pope Pius XIII is as outrageous as the promotional media for the show implies; despite the newer and more unusual packaging, he shares quite a few qualities with the kind of male anti-hero audiences have seen a million times before. The show may prove engrossing enough to make it worthwhile anyway, but only time will tell.