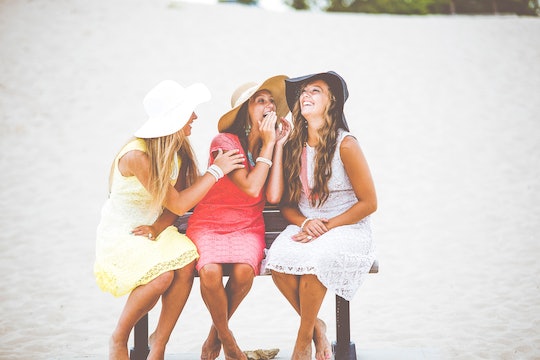 How Your High School BFF Made You A Happier Person Today, According To Science

Teenage best friendships are like nothing else: staying up all night talking and cracking up, calling and texting incessantly, showing up to every social event as a team, and just knowing with 100 percent certainty that you're going to be BFFs forever, no matter what. That may or may not be true all the time, but your close high school friendship do affect your health later in life — and the long-term positive outcomes tend to stay with you, even if your friends change over time. That's according to a new study from the University of Virginia, which found that adults who enjoyed close friendships as teenagers reported better mental health as young adults.

To reach that conclusion, the researchers studied a group of 169 15-year-olds, all of whom attended the same school, over a period of 10 years (between 2001 and 2011). The results, published this week in the journal Child Development, were striking. In short, the 15-year-olds who were merely popular turned out to be less happy overall than those who had fewer, higher quality friendships. Popularity tended to mean that the students' classmates wanted to hang out with them; close friendships, on the other hand, included psychological attachment and intimate exchanges.

Over the course of that decade, the researchers conducted in-depth interviews with the volunteers, as well as their friends and peers, to determine their true popularity and the actual strength of their friendships. Those with close friends, rather than a heightened social status, reported less social anxiety, fewer symptoms of depression, and a higher self-worth, according to HuffPost. The onetime social climbers who lacked tight bonds with friends, on the other hand, felt more social anxiety as they began to navigate adulthood.

Although the study did include a racially, ethnically, and socioeconomically diverse group, it did have its limitations. The sample group was relatively small, for one. Also, it leaves open the question of whether people who are predisposed to better mental health outcomes naturally have an easier time building close relationships with others in the first place, according to Quartz.

Still, the clinical psychology Ph.D. candidate who led the study, Rachel K. Narr, believes that there are reasons close friendships who lead to better mental health long-term. Building these friendships during the teen years, she told Quartz, teaches people they can have quality relationships outside of their families, and gives them the confidence to have positive romantic partnerships as well.

Even if you're not someone with the fondest memories of high school in terms of friendship, it's not too late. The friendships you have now are also incredibly beneficial. According to the Mayo Clinic, close friendships at any stage of life make you feel happier, more confident, and less stressed. They also help you to cope with challenging life events.

The days of slumber parties may be past, but the friendships born out of that — and the ones formed years later — as it turns out, are as important ever.