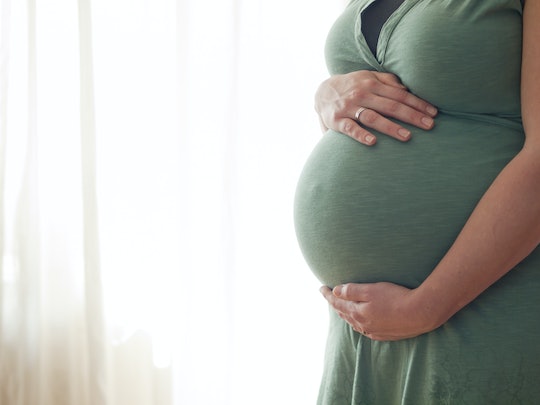 How Your OB Can Tell You're Having A Boy

From the moment that little line appeared on the home pregnancy test, you've been dying to know the sex of the baby you're carrying. You've heard conflicting things about the earliest possible time to know for sure and although there are a thousand old wives' tales circulating the internet taunting you to give them a try, you know better than to trust anything other than professional expertise. But how your OB can tell you're having a boy might surprise you.

Sarah Yamaguchi, OB-GYN at Good Samaritan Hospital in Los Angeles, tells Romper there are three legitimate ways of medically predicting the sex of a fetus: Invasive testing, non-invasive testing, and ultrasound. According to Yamaguchi, the most accurate is an invasive sampling through either chorionic villus sampling in the first trimester or amniocentesis in the second (the former collects cells from the placenta and the latter removes amniotic fluid). There are small, but serious risks associated with this kind of invasive testing, and insurance usually won't cover it unless you're over 35 or are otherwise at risk for chromosomal abnormalities.

Yamuguchi tells Romper that a newer technology called Non-Invasive Prenatal Testing is almost as accurate as the invasive tests, but doesn't carry the same level of risk as it simply draws blood from the mother. How does it work? Brace yourself: Your baby's DNA is floating around in your blood stream. All they have to do is test it for the presence of a Y chromosome.

The least accurate method is actually the ultrasound, Yamaguchi explains, despite the fact that it's also the most common. The accuracy of the prediction depends on the expertise of the person administering the ultrasound, and therefore subject to error. Still, the anatomy ultrasound performed at 18 to 20 weeks is the most popular way for couples to discover the sex of their baby, since the other methods are primarily used to screen for potential disorders.

If you're under 35 and aren't at risk for chromosomal conditions, you'll likely have to wait until about halfway through your pregnancy to find out whether you're carrying a boy or a girl. But just for fun, it doesn't hurt to try out those old wives' tales you've Googled in the meantime.