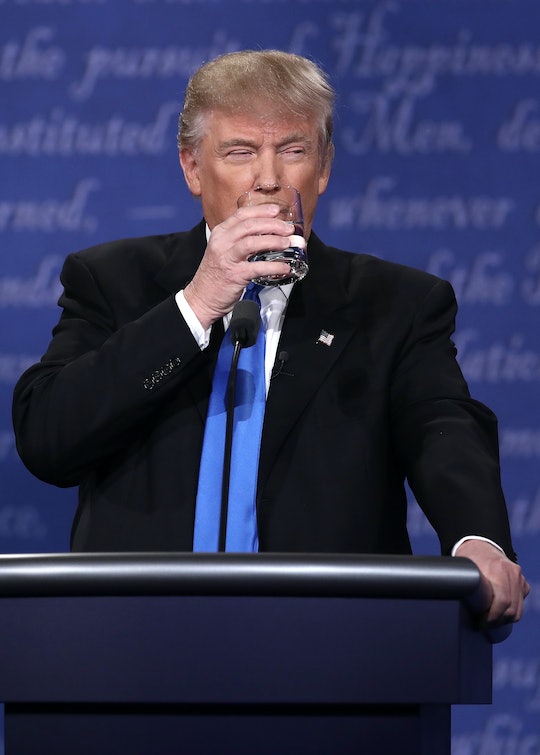 Donald Trump was highly scrutinized Monday night during the debate for repeatedly interrupting Hillary Clinton, generally being on the defensive, and maintaining his casual relationship with the truth. One thing many didn't realize, however, was that Trump was sniffling through the debate. Howard Dean, the former governor of Vermont, has suggested why that is; on Twitter, Dean has accused Trump of being a cocaine user, according to the Daily Caller. Trump's campaign did not respond to Romper's request for comment. The drug allegations were a joke on Twitter and no serious allegations have been made.

The allegation is one of the most serious explanations given for Trump's generally odd behavior Monday night. He started off the night well, remaining calm and collected during the responses. He even asked Clinton how she would like to be addressed, which was nice, even if it was a little condescending. But after the first few questions, Trump quickly started to lose his temper during each question and spoke animatedly.

He did refrain from calling Clinton "crooked" or a "liar," so that might be another reason some were skeptical of his behavior. Who was the guy at the debate who refused to call his opponent names? Certainly not the Trump we know.

One of the oddest moments in the debate was when Trump insisted that his temperament was better than Clinton's. This is coming from a guy who told a national audience that his hands "and something else" were not small at all, because he couldn't resist getting riled up about a tweet. His comment at the debate drew laughter, according to The Hill.

Trump could have brought up any one of the legitimate concerns Americans have about Clinton, but instead chose to focus on temperament as a reason why he would be a better president.

Trump also dodged questions and used what many call the "bait-and-switch" tactic to avoid discussing his own shortcomings. While this isn't unheard of in politics, it surely stood out when compared to Clinton's approach. When asked about her email scandal, Clinton responded directly and apologized without making excuses. When asked about his tax returns, Trump said he'd release them if Clinton released more emails. He didn't provide a reason for not releasing them other than that they were "under audit," even though the IRS has said that an audit has no effect on whether tax returns can be released, according to Politifact.

None of this is to say that Trump was using any type of drug, but he definitely did some odd things during the debate. Then again, what's even normal for Trump?