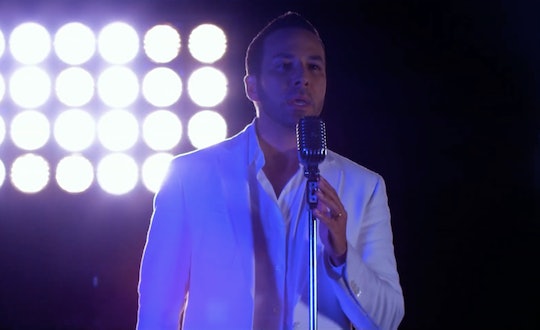 Howie From BSB Just Dropped A New Song... But It's Not For You — EXCLUSIVE

If you were worried about whether your kids would listen to music you actually like, specifically that boyband playlist you have on constant loop, you're in luck. Howie Dorough of Backstreet Boys fame has recorded a music album for kids, and the latest single is sure to be an instant fave for your little ones. But, that's not the best part. The best part is that Howie D's "The Me I'm Meant To Be" is oozing inspiration, and inspiration is something our kids can never get enough of.

According to Howie, the inspirational theme was intentional. "I wrote this for my kids as well, just to let them know that anything that's happening in your life that feels like a challenge, it's okay to embrace it and to know that you're going to learn from it, and as long as you come on the other side as a better person, it was meant to happen," the father of two boys told Romper via Skype ahead of the video premiere. He added that he hopes they are never "scared" of the curveballs life often throws at us. "Just embrace it and just always treat people the way you want to be treated."

When the video begins, we watch as Dorough takes the stage solo — something that feels slightly symbolic considering he usually joined by the four other members of the Backstreet Boys. Separately, we see two young women preparing for their own performances. One is a ballerina who we stumble while practicing her routine, eventually becoming frustrated with herself. The other is a pianist who seems hesitant to perform, but pushes herself and, like the ballerina, eventually perseveres.

They aren't alone. In between shots of Dorough singing "The Me I'm Meant To Be," he is shown appearing anxious in his dressing room as he prepares to take the stage. Even a seasoned performer like Dorough gets nervous doing something he already knows he's good at, and that's okay. In fact, it's completely normal.

Dorough's lyrics say it all:

The song is part of an album, Which One Am I?, which is set for release on July 12. It comes highly recommended, too... by Dorough's sons.

"My kids love it," Dorough proudly boasted during his Skype call with Romper. "Oh my God, they're constantly asking me in the car to play 'Monsters In My Head' or 'Worry.'"

His two boys — James, 10, and Holden, 6 — "love the music" and like to make their song requests during their morning rides to school.

Pretty soon James and Holden will be requesting a lot more than pre-recorded songs to listen to. That's because while making this album, Dorough was inspired to turn it into a semi-autobiographical live musical.

"I'm going to be in the musical and playing myself as a younger kid and as an adult. I grew up as a little kid doing musical theater, that's how I actually got started in the business," Dorough shared. "I've always wanted to do musical theater. Always an inspiration of mine has been to hopefully do a run on Broadway somewhere."

If you're not willing to wait for Howie D's turn on Broadway, more info on his musical, Howie D: Back In The Day, is available at RoseTheater.org. Which One Am I? is available for pre-order now.