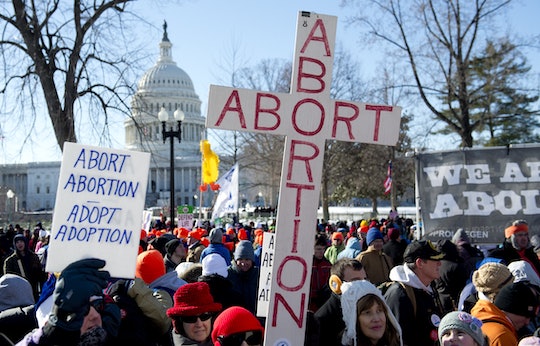 President Donald Trump may have just reinstated an executive order preventing foreign groups who provide abortions (or even provide information about abortions) from receiving any federal funding, but it's only the beginning of the anti-abortion policies his administration is likely to put in place. One that's on the radar? H.R. 586's, The Sanctity of Human Life Act. Most recently introduced to Congress on Jan. 17 by Georgia Rep. Jody Hice, according to Vocativ, the bill is based upon the idea that life begins at conception, which, if passed, would give fertilized human eggs the right to life under the Constitution. And that, of course, would have huge implications for women's reproductive rights. Here's what science just doesn't back the bill.

The debate surrounding the legal definition of personhood is certainly nothing new. The Sanctity of Human Life Act itself has actually been around since 1995, when it was first introduced by former Texas Rep. Steve Stockman, according to The Sunlight Foundation, and was then reintroduced multiple times over the years by former Texas Rep. Ron Paul. It never passed, but now that the GOP holds both Congress and the Senate — with an anti-abortion Republican in the Oval Office, Hice seems determined to give it a try. And this time he has the support of 21 other representatives, all of whom, perhaps unsurprisingly, are men.

Legally defining life and personhood as beginning at conception is important for the anti-abortion movement, because it would basically make abortion illegal — after all, if a fertilized egg is a person, then it has the same right to life as anyone else. It would also have consequences for other things, like in vitro fertilization or stem cell research, making it illegal to dispose of unused embryos, or possibly to even freeze them, according to RESOLVE: The National Infertility Association. But while defining conception as the beginning of life might be valuable from a legal or ethical perspective, medically and scientifically, it's hugely problematic. And that really comes down to one main reason: just because a fertilized egg can turn into a human being, doesn't mean it should be considered one.

Although it might be nice to think that providing fertilized eggs the right to life will mean that every egg will then be able to grow into a baby, Sean Tipton, Chief Advocacy, Policy and Development Officer for the American Society for Reproductive Medicine told CNN in 2011 that it doesn't actually align with the medical reality. Tipton said,

There are lots of fertilized eggs that never become human beings. Humans are notoriously inefficient producers, and we believe most [fertilized eggs] actually go out with a woman's menstrual flow.

Then there's the fact that, in the time between conception and birth, many pregnancies encounter issues that affect the outcome. Fetal abnormalities or complications can often mean that termination is the medically-advised option, but that would no longer be the case if the fetus has a guaranteed right to life under the Constitution. And what happens when a baby is born at some point between conception and medical viability, usually pegged at some point between 22 to 24 weeks gestation? Should doctors and parents be expected to try and keep them alive because they're people under the law?

Believing that abortion is morally wrong is ultimately an individual prerogative. But using that belief in an attempt to thwart the realities of biology is another thing all together. No matter how important a fertilized egg, embryo, or fetus may seem to someone on an ideological level, the fact remains that for a long while after conception, they need to be inside of another human's body to continue to exist. And that human being does have rights, and is a full person — and presumably one deserving of enough respect and agency to decide what is best for her and her body.

That's an important point to consider, because, as David Orentlicher noted in a post for the Harvard Law School blog, Bill of Health, given the fact that a fetus needs its mother's body to exist prior to viability, that woman is essentially lending her body to her fetus to help it survive. Offering legal personhood beginning at conception means that a pregnant woman would essentially be obligated to continue sharing her body for the entirety of her pregnancy to support the fetus' survival — whether she wants to or not, and without considering her own rights and wellbeing.

Legally though, that is an unfair — and unconstitutional — expectation. As Orentlicher explained,

[Nowhere] in American law do we require some people to give of their bodies to sustain the lives of other persons. We do not even require parents to donate their organs or their bone marrow to save the lives of their children.

If the law insisted that pregnant women continue their pregnancies until delivery, pregnant women would be singled out for a legal responsibility that no one else must assume. And that is something the U.S. Constitution does address. The equal protection clause protects people from being treated differently than other people.

Of course, it's unlikely that this reasoning will sway the minds of those who are anti-abortion, or particularly any of the men who are pushing for this bill. Yet, it's an important point to consider, because as emotional and ideological a debate as abortion is, it's also one with very concrete biological consequences and constraints. And that won't change just because the law says so.