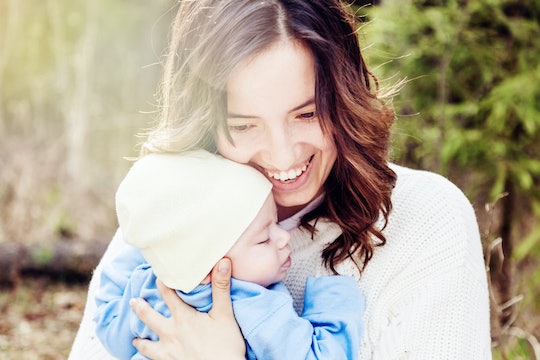 There are so many things parents do in an effort to promote intelligence in their babies, from choosing mobiles with brain-stimulating patterns to playing classical music to exposing their tiny ears to as many foreign languages as possible. But medical experts say that one of the most important things you can do to boost your infant's brain development is something you probably do all the time anyway, without even thinking about it (mostly because you can't help yourself): Science says hugging makes your baby smarter. Just... hugging!

The concept of physical affection being beneficial for babies isn't a new one, of course, particularly in the case of premature babies. It's also not exactly breaking news that these benefits last for years. In fact, maternal skin-to-skin contact was found to enhance "prematurely born infants' physiological organization and cognitive control" for the first 10 years of life in one 2014 study, according to Psychology Today.

That's a pretty big deal right there, but your hug could be even more powerful than you thought. A 2017 survey from the Nationwide Children’s Hospital in Ohio involving 125 babies (both full-term and premature) examined the level of their reactions to physical touch. While premature babies responded to affection less than full-term babies, the "brain response to touch was stronger when babies in the NICU spent more time in gentle contact with their parents or healthcare providers," reported Science Daily.

“Making sure that preterm babies receive positive, supportive touch such as skin-to-skin care by parents is essential to help their brains respond to gentle touch in ways similar to those of babies who experienced an entire pregnancy inside their mother’s womb,” researcher Nathalie Maitre explained.

It's completely amazing to think that simply hugging and snuggling your baby is enough to influence the wiring of her brain so much that it could help her to respond to and benefit from stimuli all throughout her childhood (and beyond). But, again, this most recent research simply serves to validate and elaborate upon years of theories from scientists, child development experts, teachers, doctors, and even parents. The take-home message, it seems, always boils down to this: Babies who get lots of hugs and attention are flooded with good feelings and magical hormones that do more for their brains than any amount of organic baby food or flash cards could ever do.

Sadly, science also has plenty to tell us about what happens to babies who are deprived of this kind of interaction: Their brains can literally shrink, as has been observed in Romanian orphans and children of neglectful parents alike. The undeniable truth, as University of Maryland child development researcher Nathan Fox explained to Live Science, is that tactile stimulation promotes brain development during a time when babies are at their most malleable. And just as the benefits of skin-to-skin contact for preemie babies lasted for years, so do the smarts that come with lots and lots of early hugs.

"The idea is that those kids who develop a secure attachment actually show enhanced brain activity at age 8," said Fox.

Let's face it: You're going to hug your baby all day, every day, no matter what. But knowing that you're helping her brain to develop in the process just proves what an awesome mom you really are.