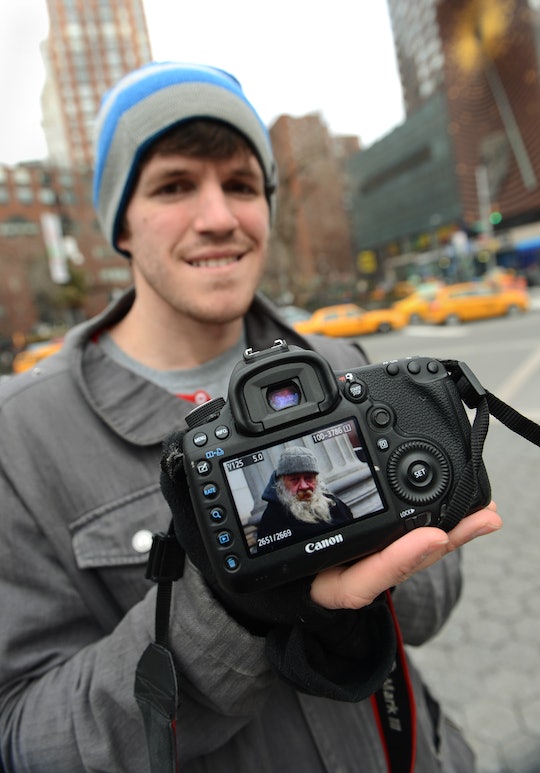 For the last five years, Brandon Stanton has used his talents as a photographer to capture compelling (and sometimes heartbreaking) stories in Humans of New York, a catalog of portraits, quotes, and captions turned into a popular Facebook series. The site has elevated stories from all walks of life in New York — from first-person accounts from political refugees, to beautiful tales of first dates turned into lifelong love. But Stanton recently announced that in April, the site would focus on telling stories that some might find difficult: those gathered from the halls of the Pediatrics Department at Memorial Sloane Kettering Cancer Center, one of the country’s most elite treatment facilities. And the first story in the Humans of New York childhood cancer series is heartbreaking, but worth sharing.

On Thursday, Stanton introduced his 17 million Facebook followers to Gabe, a little boy whose parents immigrated to America from Albania. In a post, Gabe’s mother described her son as “a perfectly healthy little boy” until he started having a “pins and needles” feeling in his mouth two years ago, which was quickly followed by numbness and an inability to speak:

When the results came in, he asked Gabe to wait outside the room. That’s when I became scared out of my mind. It was the worst possible news. The doctor said it was a tumor the size of a big olive. In the brain.

A diagnosis of cancer in childhood is rare, but can be devastating for a family. According to its website, the American Cancer Society estimated that in 2014 some 15,780 kids and teens were diagnosed with some form of the disease, and nearly 2,000 died from their illness. In a subsequent post, Gabe’s mother explained that the tumor that doctors had discovered in Gabe’s brains was affecting his speech centers and meant that her son would have to undergo chemotherapy as well as surgery. But even after doctors performed the operation, there weren’t any guarantees that Gabe would be healthy:

After the surgery, we thought it was over. We think it’s done. Gabriel is getting better and it’s like nothing happened. His teachers can’t believe it! We’re even planning on going to the beach. But the doctors tell us that they can’t identify the tumor. [...] finally two hospitals gave the same opinion: Descmoplastic Small Round Blue Cell Tumor. Nobody had ever seen this tumor in the brain before. They told me not to read about it.

That’s the point in the story where Stanton changes perspective a bit, finally allowing readers to hear from Gabe himself. “I had a brain tumor,” said Gabe. “A very rare one, actually. I was the only one in the world with this type of brain tumor.” But after going through “a lot of things this past year,” the third-grader seemed to be recovering well after treatment and adjusting to life as a cancer survivor.

I can tell you, if you get brain cancer, try not to worry! It will be very hard and you will get lots of fevers but you have to be brave. You have to be brave like me because I’m very brave about this thing. And if you don’t know how to be brave, I can teach you.

According to Stanton, the efforts of doctors, nurses, and researchers like the ones at the Pediatric Department of the Memorial Sloan Kettering Cancer Center make it possible for stories like those of Gabe and his family — “war stories” from the front lines of pediatric cancer — to have happy endings.

But there is an important reason for spotlighting the center this month, according to Stanton. After 30 years at its helm, pediatrics chairman Richard O’Reilly will retire from the Center this year. As head of the Center’s clinical and research endeavors, O’Reilly’s exit offered an opportunity to raise much-needed funding for cancer treatments and family support. Stanton has organized a $1 million crowdfunding campaign to fight pediatric cancer in O’Reilly’s honor.

So, visit the Humans of New York Facebook page this month to read Gabe’s story in its entirety, as well as the stories to come from the staff, patients, and families at Memorial Sloane Kettering. They’re certainly not easy to read — and tissues will be a necessity — but they’re important. As HONY has taught readers over and over again, there is healing in storytelling. And by supporting the campaign and reading these incredible stories of crisis and recovery, each of us has the power to help other children and families to heal.