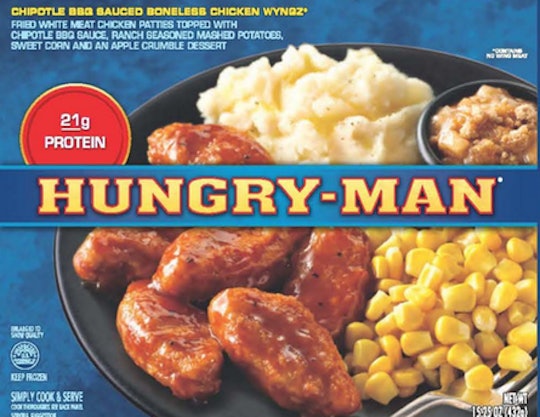 Hungry-Man Is Recalling These Frozen Dinners Over Salmonella Concerns

In the wake of a recent widespread salmonella scare, a number of food products have been recalled in the past week or so. Parents and caregivers in particular are likely concerned about this recent series of recalls, as many kid-friendly snacks are at risk. Most recently, Hungry-Man has recalled some frozen dinners also over salmonella concerns and here's what you need to know and how to tell if your meals are affected.

Certain 15.25-ounce Hungry-Man microwaveable dinners are now included in this recall stemming from potentially-contaminated whey powder, as Delish reported. Hungry-Man dinners that are affected include "Chipotle BBQ Sauced Boneless Chicken Wyngz" with a "best buy" date of 9/16/19, according to the U.S. Department of Agriculture's (USDA) Food Safety and Inspection Service (FSIS). Pinnacle Foods, Inc., which produces the frozen dinners, and Hungry-Man voluntarily recalled them after being notified by their supplier that a whey powder ingredient used in the ranch dressing seasoning had been recalled for potential salmonella contamination, according to Delish. (In case you were wondering, the seasoning was added to the mashed potatoes that was packaged with the chicken dinner.)

Romper's request for further comment from Hungry-Man regarding the recent recall was not immediately returned.

To double-check if your frozen dinners are included in this recall, check to see that your package has an establishment number of either "EST. P138" or "P-138" is on the side of the carton, according to the FSIS. It's also worth noting that affected meals were shipped to retail locations in Pennsylvania, Massachusetts, and Virginia.

According to the FSIS, consumers who have purchased recalled dinners are advised not to eat them. Instead, you should throw them away or return it to the original place of purchase.

On Tuesday, FDA Commissioner Scott Gottlieb assured the public that there is currently no evidence that anyone has been sickened so far as a result of these recalls — and that the recalls are being initiated "out of an abundance of caution," according to a news release. "It’s early in our investigation, and to date there have been no cases of illnesses associated with any of these recalled products," Gottlieb said, according to the FDA's press release. "I want to reinforce that, at this time, this is a cautionary step and we appreciate that these companies are taking these measures." He continued:

Our staff is actively engaged in this investigation and we take this very seriously. We know that these are products that are widely eaten by consumers, including children. That’s, in part, why we are taking steps to intervene early on this potential risk, and why we will be communicating regularly with the public to provide information and updates on this issue.

According to the U.S. Centers for Disease Control and Prevention (CDC), salmonella causes roughly 1.2 million illnesses every year in the United States, including 23,000 hospitalizations and 450 deaths. And food is the responsible source for about 1 million of these illnesses. What's particularly worrisome is that children are at the highest risk for salmonella infection — and kids under age 5 have the highest rates than any other age group, according to the CDC. Most people affected by salmonella experience diarrhea, fever, and abdominal cramps 12 to 72 hours after being infected, as noted by the CDC, and symptoms typically last four to seven days. Although most people end up recovering without treatment, some people experience diarrhea so severely that they require hospitalization.

The FSIS urges anyone who might be concerned about a related illness to contact their health care provider. Furthermore, consumers with questions about this recall can contact Pinnacle Foods Consumer Care at 1-888-257-1057.