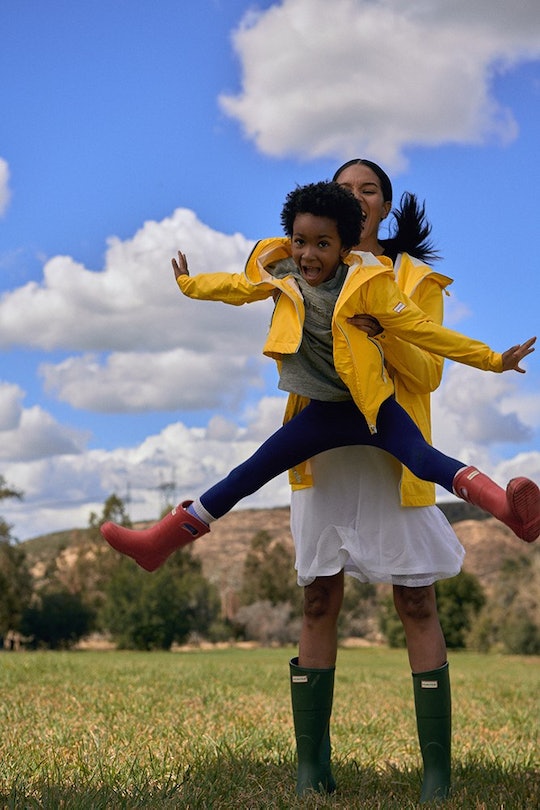 OMG, Hunter Boots Are Coming To Target & The Price Is Unbelievable

If you’re a Target addicted mom like me, you get super excited when you find new designers featured in stores. Lucky for you (and me), Target is partnering up with the British brand Hunter this spring. The brand is famous for their iconic rain boots, worn by Queen Elizabeth, Princess Diana, and numerous celebrities in past years. If you want in on this iconic style, rev up your engines, because Hunter boots are coming to Target this April, just in time for spring.

On April 14, Target will be launching the Hunter for Target brand, which will feature boots, apparel, gear, and accessories for the whole family at super affordable prices. Hunter boots, in particular, are pretty popular across the pond, but have been worn by plenty of American celebrities including Meghan Markle, Rihanna, and Kendall Jenner. Traditionally, the boots are pretty pricey at about $150, but with their new Target line, you can grab a pair for around $30.

Although it’s a British heritage brand, Hunter’s creative director Alasdhair Willis explained in a Target press release that the company was started in Scotland in 1856 by an American entrepreneur. The brand has worked together with Target to create a bright and colorful collection of all-weather wear and gear for children and adults, noted Mark Tritton, Target’s executive vice president and chief merchandising officer, including sunshades, hammocks, coolers, packable outerwear, and backpacks. He added that the line was developed with protection from the elements in mind and with more than 300 items, it's one of Target’s largest collaborations ever.

While Hunter has been around for decades, Willis says their boots gained major popularity in 2005 when they were worn by supermodel Kate Moss to the Glastonbury festival. She carried off her muddied rain boots like a fashion pro, and since then, Hunter boots have become the go-to footwear for music festivals. You can pair them with jeans, shorts, dresses, you name it, because they seem to look great with anything.

But rain boots aren’t just about fashion, celebrities, and music festivals. For most parents, they are the only way to keep their active kids’ feet dry and clean from the dirt and mud outside. Plus, the fact that they last forever, have good traction, and are super easy to clean make them a convenient go-to when kids are trekking and playing outdoors. It also does help that rain boots look fun and stylish with any outfit, girl or boy, and for some reason, kids just really seem to love wearing them.

Target still hasn’t released specific product information or pricing, but after looking at their promotional photos, it looks like the line will have some awesome stuff for the family. In the promos, you can see colorful Hunter Wellington (also known as Hunter Wellies) and Hunter Chelsea boots for kids and adults, along with some terrific looking rain jackets and bags. As April nears, I’m sure there will be more information and photos of the line and its products, so there’s a lot more to look forward to.

It’s not like you needed a reason to head to Target, but this new line is definitely worth checking out. Finding high-end designer stuff at super affordable prices is the Target way, and picking up a pair of Wellies for $30 is surely a deal you can’t pass up.

More Like This
The Best Halloween Family Pajamas To Match Your Boos
13 Nursing Bras & Pumping Bras You'll Actually Love To Wear
Here’s How To Keep Your Baby Safe When Their Older Sibling Is Sick
Can Elderberry Help Prevent Illness In Kids? Doctors Weigh In