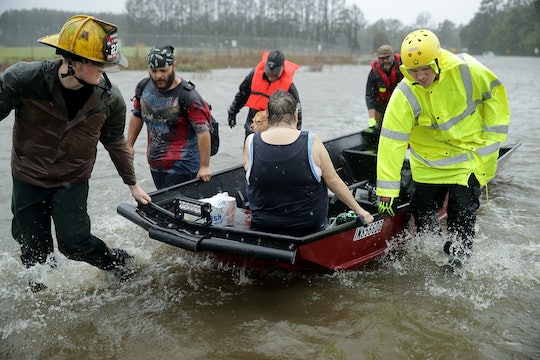 Hurricane Florence Has Made Landfall & Hundreds Are Desperate For Rescue

Officials in North and South Carolina spent most of the past week urging residents in coastal towns to evacuate amid warnings of severe devastation due to Hurricane Florence, and while many were able to flee to safer ground, there were some who were unable — or unwilling — to leave. But in North Caroline Friday, Hurricane Florence made landfall, and intense storm surges have since left hundreds of people desperate for rescue, with some even reaching out for help on social media as a result of widespread power outages and unreliable cell reception.

On Friday morning, MSNBC correspondent Garrett Haake reported from on the ground in New Bern, North Carolina, where he shared footage of members of the North Carolina National Guard "going door to door" through a residential neighborhood, "methodically ... checking front doors, back doors, [and] looking in windows, making sure that absolutely no one [was] left behind." The video, shared by NBC's TODAY show, was a testament to the dedication of those involved in the rescue effort, but it also illustrated just how devastating this storm is already proving to be. Haake explained in the clip that the rapidly rising water levels in New Bern have "either trapped people in their homes, or just made it entirely too difficult to drive out," leaving them in need of emergency assistance. But the most concerning part? It only seems to be the beginning of what the incredibly slow-moving hurricane still has in store.

More than 100 people were reported to still be in need of rescue from their homes or vehicles in New Bern alone as of Friday morning, according to The Washington Post, and though areas north of Wilmington had already seen more than a foot of rain by Friday morning, officials warned that there was likely still much more to come. At a morning briefing, FEMA associate administrator Jeff Byard said that both North Carolina and South Carolina still faced "24 to 36 hours" of "a significant threat from heavy rain," while the National Weather Service's Chris Wamsley said there could be anywhere between 20 to 40 inches of rain on the way.

Part of the problem? The storm, which had been downgraded to a Category 1 by the time it reached land, is moving so slowly that it will likely spend a lot of time pummelling the two states before it blows over. And previous experience with similarly slow-moving storms doesn't exactly set a pretty optimistic precedent: according to The New York Times, 2017's Hurricane Harvey also took its time, dropping "nearly 50 inches over four days" in some areas, and causing billions of dollars in flood-related damages in Texas.

In a news conference Friday morning, North Carolina governor Roy Cooper emphasized that Hurricane Florence "will be here for a long time," according to The Guardian, and said that, by the time it's finally over, it will be "hard to find a [North Carolina] resident who has not been impacted" by the storm. More than 500,000 people are also now thought to be without power — which is particularly concerning given the ongoing threat of flooding and landslides.

The National Weather Service is continuing to update residents in the Carolinas about "significant flooding," particularly along creeks and streams, and that, given their potentially-deadly nature, those living in areas at risk for landslides "should be aware of the danger and prepared to act" (ideally that would include leaving any areas with steep slopes and moving to higher ground.) The NWS also warned that "short intense bursts of rainfall" are the cause of most landslides, and that those in harm's way need to remain vigilant, since "many landslide fatalities occur when people are sleeping."

So far, Cooper said that there thankfully haven't yet been any reported fatalities linked to the hurricane, according to CBS News, but given that some parts of North Carolina have already seen 10-foot storm surges — and given that the state is still expected to see extreme wind and rainfall into Saturday — officials are urging those who remain in the storm's path to stay put, and to stay as safe as possible.

As grim as the situation currently seems though, it's clear that first responders and rescue teams are doing the very best the can to help those in need. In New Bern, between 150-200 residents were able to be brought to safety, and on Friday morning, and while another 150 or so remain, the city tweeted, "We have 2 out-of-state FEMA teams here for swift water rescue. More are on the way to help us. WE ARE COMING TO GET YOU."

With Hurricane Florence having already made landfall, it's clear that those who remain in its path will have to endure an incredible unsettling couple of days until the storm finally begins to die down. Until then, hopefully all residents and rescue workers can stay safe amid the devastation.