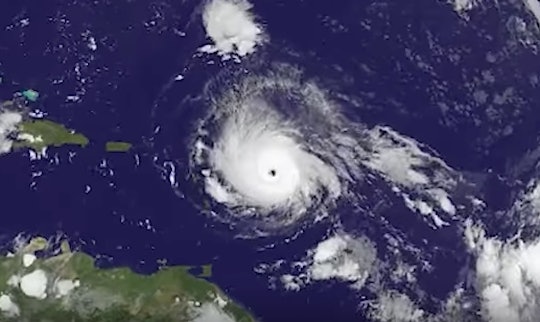 Hurricane Irma Is Now Larger Than Ohio, & Here's What To Expect

On Wednesday, Hurricane Irma slammed into the Caribbean islands, destroying property, flooding streets, and cutting off communication to Barbuda, according to Vox. Scientists say the Category 5 storm is among the most powerful hurricanes ever recorded, with sustained winds of 185 mph. The record-breaking storm also clocked in at 364 miles wide as of Wednesday, meaning Hurricane Irma is now larger than Ohio, which is 220 miles wide, according to Cincinnati.com. Irma is a sizable — and potentially catastrophic — hurricane, but, sure, let's continue to deny that climate change has had an impact on the weather.

Climate change may not cause hurricanes, but this hurricane season proves how much of an effect man-made global warming has had on the earth. According to Bloomberg, scientists believe that climate change has made Hurricane Irma much worse because Irma is receiving a boost of energy and moisture from the higher-than-average sea-surface temperatures.

Unfortunately, the physicality is very clear: Hurricanes get their destructive energy from the warmth of the ocean, and the region’s water temperatures are super elevated. ... Burning coal, oil and gas warms our planet and that way supplies energy for the build-up of ever more powerful tropical storms.

But climate change is not just impacting Hurricane Irma's size and wind speed; it's also affecting the frequency of high-powered storms. According to the Boston Globe, scientists say it's unusual to have a powerful storm like Hurricane Irma form so quickly after another catastrophic storm — in this case, Hurricane Harvey. In late August, Hurricane Harvey barreled into the Texas Gulf Coast, displacing more than 32,000 residents and killing as many as 60 people, ABC News reported.

And expect to see hurricanes like Irma and Harvey happen more often. According to scientists, the earth will become warmer as carbon dioxide caused by human activity increases, and that means storms will be stronger and more intense, Boston Globe reported. There will be more rainfall, higher wind speeds, and greater storm surges from rising seas, according to Lifehacker, because warm waters power hurricanes.

Not entirely convinced? Then consider hurricane history. Of the 222 hurricanes that formed in the Atlantic Ocean since 1982, only 13 have been labelled Category 5 storms. According to the Boston Globe, many of those storms happened during a period when the ocean's water temperature was warm. This includes the hurricane season of 2005, when Hurricane Katrina made landfall (Hurricane Rita and two other Category 5 hurricanes also caused destruction that year).

Hurricanes do not exist in a vacuum. Hurricanes do not form independent of human activity. The warmer the earth gets, the worst the storms get. So the more people deny that climate change is real — a fact, by the way, that 97 percent of scientists agree with, according to Mother Jones — the more you could expect to see deadly storms destroy entire cities and lives.